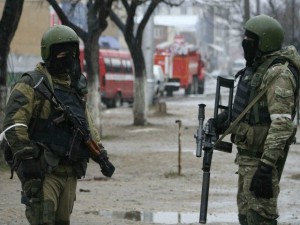 One of the factors spurring Russia to action in Syria was the success of ISIS recruitment in certain parts of Russia. A notable example of this is the province of Dagestan, which has a large and impoverished Muslim population, a history of unrest, some hot spots of radical Salafist Islam, and lingering resentment against heavy-handed police tactics.

Russian officials are expressing concerns similar to those of American, European, and Australian authorities: those ISIS recruits will eventually come home, bringing their murderous ideology, terrorist contacts, and military experience with them.

On the bright side, a report by the Associated Press notes that Dagestan has become noticeably less violent as extremists depart for service in the Islamic State, and the police have moved quickly against many returning militants. Three ISIS veterans have been killed by police so far, with another dozen either captured or voluntarily surrendering themselves to the authorities.

One of the individuals taken into custody is quoted as saying he joined a local militant group upon his return to Dagestan but turned himself in after he got tired of trying to evade the police. The AP also mentions an active terrorist cell, including ISIS recruits returned from Syria, that was busted while plotting a bomb attack on the Moscow public transportation system.

The Russians are worried about the long-term potential for trained ISIS fighters to build terror cells back home, if they begin returning in such numbers that the police can no longer keep up. Also, they seem to be aware that their more active role in Syria increases the risk of terrorist retaliation at home. Even President Vladimir Putin weighed in, declaring that Russia “can’t allow them to use the experience they have gained in Syria back home.”

ISIS didn’t invent the idea of carving an Islamic “caliphate” from other nations; Dagestan’s separatists have long dreamed of creating a Caucasus Emirate, an “independent state governed by sharia law,” as the AP puts it. It is suggested that some local officials encouraged the separatists to decamp for Syria and work on their caliphate instead, but the return of ISIS recruits means it was only a temporary solution. There are said to be about 700 ISIS recruits from the Dagestan region, which will pose a significant security risk, if most of them come home.

“Most local imams in Dagestan shun radical views, but they have found it hard to counter the appeal of radical ideas promoted by the Islamic State. Some imams who spoke against radical Islam have been killed,” reports the AP. The point was illustrated by the necessity of quoting a more moderate imam anonymously.

An ironic footnote concerns the formerly turbulent region of Chechnya, which has grown more stable and more firmly aligned with Russia as the ISIS threat has grown, and which allegedly supplied thousands of recruits to fight in Syria on behalf of the Assad regime.