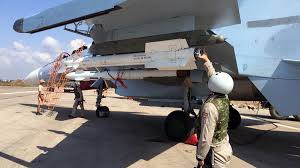 Since early Thursday morning, Russian combat jets have been taking off from this base in western Syria, heading out for more of the heavy bombing runs that have allowed Moscow once again to portray itself as a major global player capable of projecting military power far from its borders.

The Russian Defense Ministry flew Moscow-based reporters to the air base overnight, giving international news organizations their first inside look at its operations here.

The trip to the Syrian base was organized Wednesday, the same day the Kremlin announced that Syrian President Bashar Assad had come to Moscow and met with President Vladimir Putin. Assad’s visit on Tuesday was his first known trip abroad since war broke out in 2011 and raised intense speculation about the two leaders’ motives.

In a sign that a diplomatic push is underway, Russia also announced Wednesday that Foreign Minister Sergey Lavrov and U.S. Secretary of State John Kerry would meet Friday in Vienna. They will be joined by their counterparts from Saudi Arabia and Turkey, both of which are firm Assad critics.

Russia has been conducting daily airstrikes in Syria since Sept. 30 to back a Syrian government offensive. Moscow says it is targeting militants, especially from the Islamic State group and other extremist organizations. The United States and others have criticized the strikes, which they say are aimed primarily at groups fighting Assad’s forces and likely only to fan the violence.

On Thursday, dozens of jets could be seen parked around the Hemeimeem base, located near the coastal city of Latakia. The large base is protected by air defense systems, which could be seen deployed around its edges.

Russian servicemen, who wear crisp desert-style uniforms, have been barred from talking to the journalists.

In launching the air campaign, Putin certainly realized that it would not change the course of the war and help Assad’s forces win. His apparent aims were to show all of the players that they would not be able to unseat Assad by force and to help cement the Syrian government’s grip on the territory it still controls.

The greater objective, however, seemed to have been to foster political talks that could preserve the Syrian state and allow Moscow to protect its interests in the region.

One of Putin’s other goals with the Syrian military intervention has been to bring Moscow and Washington together for a security dialogue in which Russia would be treated as an equal. The hope is that this would go a long way toward improving ties and ending the Western isolation that resulted from the Ukraine crisis.