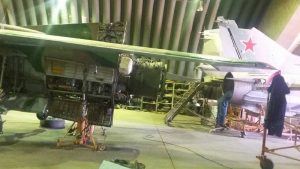 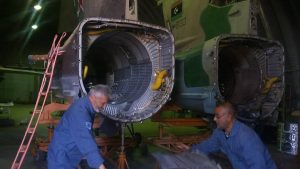 On Feb. 24, 2017, photographs taken by Libyan National Army Air Force technicians — and which appeared on social media — revealed that Russia appears to have supplied at least one warplane to forces under the command of Marshal Khalifa Haftar, like reported by warisboring.com.

Haftar’s army, concentrated in eastern Libya and based in Tobruk, is the chief rival of the U.N.-backed Government of National Accord based in the western capital of Tripoli. The 73-year-old marshal, who once lived in exile near the CIA headquarters in Virginia, has received military support from Egypt and the United Arab Emirates, among other countries.

And, as the evidence strongly suggests, Russia as well.

Indeed, a MiG-23 Flogger, likely a MLD version — with the distinctive Russian air force roundel on the tail appeared Al Abraq air base, which is under the control of Haftar’s forces. The aircraft seems to have been sent in parts for final assembly in Libya, which would have made the aircraft easier to smuggle into the country.

Overhauling a fighter plane is not an easy or inexpensive process. The good news for the LNA-AF, however, is that the Flogger is probably in fair-to-good condition as Russia withdrew the type from front-line aviation units between 1997 and 1999 when the jets still had relatively few flying hours.

Several of the type continued to fly in reserve and training units, while others went into storage.

Haftar has been building a relationship with the Kremlin for some time. On Jan. 11, 2017, Haftar toured the Russian aircraft carrier Admiral Kuznetsov during the vessel’s return voyage from the Eastern Mediterranean, where the carrier supported combat operations in Syria.

In addition, the Libyan general spoke with Russian Defense Minister Sergei Shoigu via video conference, and — once back on land — met with Valery Gerasimov, the head of the Russian military’s General Staff at a military base in Tobruk. The official purpose of these talks was the fight against terrorism in the Middle East.

Two additional resolutions granted permission for the provision of non-lethal equipment, technical assistance, training and financial support. Haftar has claimed that Russia is seeking to end the arms embargo to his country and could supply him with weapons. Although, these restrictions on weapons exports have not particularly mattered as countries have continued supplying arms to Libya’s armed factions.

During two days beginning on Jan. 8, 2017, Admiral Kuznetsov conducted military exercises in Libyan territorial waters in coordination with the Haftar’s forces. And on two occasions in June and November 2016, Haftar met with senior Russian officials in Moscow and requested help to fight Islamist militants.

The Kremlin never stated whether it would offer military support to Haftar. But on Feb. 1, 2017, a Russian Il-76TD transported 70 wounded Libyan National Army fighters to Russia from Libya’s Benina air base. The transport plane landed in Egypt on its way to Moscow.

The Russian-supplied MiG-23s should moderately enhance the LNA-AF’s capabilities and help it compensate for high combat attrition. The jets most likely do not have precision strike capabilities, but compared to MiG-21s, the mainstay of the LNA’s jet fighter fleet, they have a larger payload and greater range.

The MiG-23MLD is also a superior interceptor compared to the MiG-21.

Furthermore, while MiG-21s are only equipped with IR-heat seeking short range missiles such as the AA-2 Atoll, the MiG-23MLDs can come equipped with more advanced IR missiles including the AA-8 Aphid, AA-11 Archer and the semi-active radar homing AA-7 Apex missile with a range of up to 50 kilometers.

This should enhance the LNA-AF’s abilities to enforce a “no-fly zone” or to counter the few jets of the GNA’s Libyan Dawn Air Force — which has only found a single foreign supplier, Greece, willing to help supply parts for its paltry fleet.

The LDAF is at a distinct disadvantage when compared to Haftar’s small but supplied air arm, now made all the more apparent thanks to Russia.