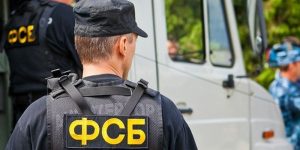 Federal Security Service of Russia detained in Moscow members of the so-called “sleeping cell” of the international terrorist organization Islamic State (ISIS), who planned to carry out terrorist attacks in public places. This was reported by TASS agency with reference to the Russian FSB Public Relations Center, according to 112.international.

“As it was established, the cell members planned to commit resonant terrorist acts in September 2017 by organizing explosions in public places and on objects of transport infrastructure,” the FSB noted.

All members of the cell are detained. “Two ready-to-use improvised explosive devices of high power were found and seized in their places of their residence,” it was reported.

As it was reportes earlier ISIS claims to have captured and killed Russian soldiers in Syria. Russian defense ministry denies information about death of Russian serviceman in Deir-ez-Zor.

According to SITE, two Russians were captured in the western part of Deir-ez-Zor, while another Russian trooper was killed. Besides, ISIS fighters claimed deaths of another 33 Syrian army soldiers.