Russia has fired a new supersonic cruise missile into Syria for the first time, it has emerged 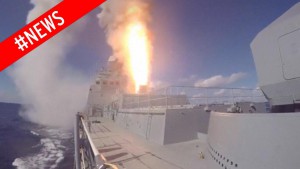 The P-800 Onyx missiles were launched at a warehouse which the Russian defence chiefs say was storing arms used by rebels in the war-torn country.

At least two of the weapons – which can travel at 1,980mph at sea level – were fired from coastal defence launchers.

The missiles can carry nuclear or conventional warheads and can travel at distances up to 185 miles.

One of the Bastion-P launchers used to fire the missiles – which were designed to be used against ships – is thought to be based 19 miles inland from the Mediterranean.

Russian military affairs specialist Konstantin Sivkov told a state news agency: “This was the first time the Bastion complex, equipped with Onyx missiles, has been used against targets on the ground.

“I assume that it was fired not so much in order to destroy some impotent enemy position but to check, under combat conditions, the possibility of using this weapon for land attack.”

The missiles were launched at the warehouses on Tuesday.

Russia has this week stepped up its attacks on the besieged civilians in the Syrian city of Aleppo.

Bombs rained down on the city in the biggest blitz in weeks.

Putin’s warplanes and ships opened fire on the city, hitting rebel-held areas after a three week halt in air-strikes.

And the Russian Defence Ministry announced the launch of a major campaign in Homs and Idlib provinces, after a huge deployment of cruise missile-carrying ships and submarines docked off the Syrian coast.

It follows a phone call between Putin and US President-elect Donald Trump in which the Kremlin said the two agreed on their “number one enemy” of international “extremism and terrorism.”

Russia declared a halt on the campaign in mid-October to allow the 250,000 trapped civilians to leave under the terms of an amnesty.

Both sides accused the other of targeting checkpoints with sniper and mortar fire, meaning very few people managed to cross into government-held West Aleppo.

Activists said they were sent text messages from the government in the early hours of Sunday to evacuate before a “strategically planned assault using high precision weapons occurs within 24 hours.”

Rebel-held Idlib, which neighbours Aleppo, was not part of the moratorium, and has seen relentless bombing in the past few weeks including a strike on a school which killed 22 children.

At least 100 civilians in west Aleppo have also been killed by rebel rockets launched at the government-controlled territory in a recently failed counterattack designed to break the siege.

The divided city has been the scene of intense fighting since 2012, when the revolt first started a war that has so far killed around 450,000.

Last week the UN warned that residents in opposition neighbourhoods will starve this winter unless urgently needed aid is allowed in.