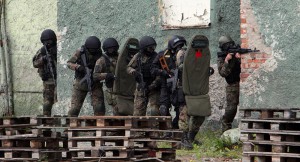 The Russian Federal Security Service (FSB) has detained seven individuals in Yekaterinburg on suspicion of their participation in Daesh who were planning terrorist acts in Moscow and St. Petersburg and were to head to Syria afterwards to fight in the ranks of the Daesh militants, the FSB said Monday.

“On February 7, 2016, the Russian Federal Security Service detained seven members of a criminal group from Russia and countries from Central Asian countries, who were members of the Daesh international terrorist group that is prohibited in Russia, had prepared for huge terrorist acts using homemade explosive devices in the cities of Moscow and St. Petersburg, and in the Sverdlovsk region,” the FSB said in a press release.

The head of the group has been identified as coming from a terrorist group in Turkey, according to the FSB. After conducting the terrorist acts in Russia, the group was to head to Syria to fight in Daesh ranks, it added.“The leadership of the group was run by a member from a terrorist group that arrived from Turkey…It has been affirmed that after carrying out the terrorist attacks [in Russia], those who were detained planned to leave for Syria to participate in military actions in the ranks of Daesh,” the press release reads.
sputniknews.com