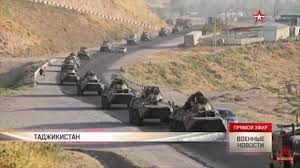 The Russian military has deployed heavy military equipment along the border between Afghanistan and Tajikistan apparently to prevent the threats posed by the terror groups to the Central Asian countries, it has been reported according to khaama.com.

Chief of the Main Directorate of the International Military Cooperation at the Russian Defense Ministry, Maj. Gen. Aleksandr Kshimovsky on Tuesday informed regarding the deployment of the military equipment in support of the Tajikistan border forces.

He told the RT TV that the armaments will make it possible to expand the capabilities of Tajikistan’s armed forces “to repel the terrorist threat and create an effective barrier along the Tajik-Afghan border.”

This comes as Russia has long been expressing concerns regarding the deteriorating security situation in northern parts of Afghanistan.

The country is mainly concerned regarding the attempts being made by the ISIS terrorist group loyalists to expand their foothold in northern parts of Afghanistan.

Earlier, reports emerged suggesting that some foreign militants belonging to the ISIS terrorist group have migrated from Syria and Iraq after they were hardly suppressed during the military operations.