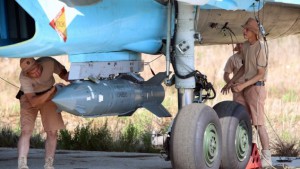 The shipments are part of a broad Russian-Iranian-Syrian alliance forged in recent months by a senior Iranian general, Al-Quds Force commander Maj. Gen. Qassem Soleimani. Soleimani is said to be coordinating the Russian-Iranian supply effort.

The planes are operating out of Russia’s newly expanded operating base in the Syrian coastal city of Latakia, and were spotted by intelligence agencies on the tarmac at the base.

According to the report, “the flights are not registered, and are in breach of two United Nations Security Council resolutions which impose an arms embargo on Iran.”

Along with the weapons, Iran is shipping troops into Syria to aid embattled Syrian strongman Bashar Assad — these too are arriving via the Russian base in Latakia.

While Iran insists it is only helping Assad’s forces in the country’s four-year-old civil war in an “advisory capacity,” several Iranian generals and a significant number of Shiite Lebanese Hezbollah fighters loyal to Iran have been killed in battles against Islamic State, the al-Qaeda-linked Nusra Front and other rebel groups.