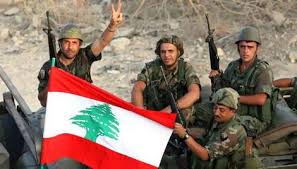 Lavrov said Moscow was ready to boost the Lebanese Army by equipping it with “specialized equipment” to fight terror groups.

Lavrov made the comments at a meeting of the Lebanon Support Group at the United Nations General Assembly meeting in New York on Wednesday, the Russian Tass news agency reported.

“We give unconditional support to the people of Lebanon in opposing the terrorist and extremist groupings like the Islamic State and Jabhat al-Nusra,” Lavrov said. “We confirm the readiness to continue upgrading the potential and combat readiness of the Lebanese forces as they stand up to terrorism.”

The foreign minister noted that Russia had “recently signed supplementary agreements on the supplies of specialized equipment to Lebanon,” but the report did not elaborate on what kind of weapons were involved.

Lavrov’s statements came on the same day that a Russian military force, recently deployed in Syria, began airstrikes against targets in support of Syrian President Bashar Assad, who is fighting a four-year insurgency.

While the Russian military mission is ostensibly to combat the Islamic State and Jabhat al-Nusra terror groups, initial reports claimed that the warplanes also targeted more moderate rebel groups seeking to bring down the Assad regime.

The airstrikes have raised tensions with the US, which is conducting its own air campaign against IS in Syria but, in stark contrast to the Russians, insists that Assad must be removed.

Israel has watched with mounting concern the buildup of Russian forces, which included strike aircraft, tanks, and advanced anti-aircraft systems that could threaten Israeli Air Force operations in the region. In particular, Israel fears advanced weapons could find their way into the hands of the Lebanese-based Hezbollah terror group that has fought alongside Assad’s regular army against rebel groups.

Several airstrikes in recent years, attributed to Israel, have targeted alleged weapons conveys and arms depots in Syria that were intended to supply Iran-backed Hezbollah.

In February, Lebanon took delivery of $25 million worth of US weapons and ammunition that were sent to help the country fight against Syrian-based Islamic extremist groups. The shipment included 70 M198 155-mm howitzers and millions of rounds of shells and ammunition.

A November 2013 agreement was to see France supply $3 billion worth of weapons, paid for by Saudi Arabia, to the Lebanese Army, but only a small number of munitions have since been delivered.

Lavrov also noted Russia’s understanding of Lebanese concerns over the influx of some 1.5 million refugees who fled the fighting in neighboring Syria.

“We’re rendering assistance along the channels of the Office of the UN High Commissioner for Refugees, as well as along bilateral channels,” Lavrov said. “But it’s clear that an earliest possible peace settlement in Syria and assistance to the Syrian government is needed to create the conditions conducive to the return of refugees.”