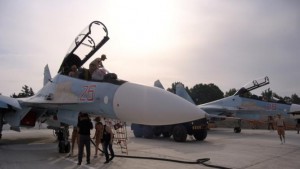 Russia has reportedly been studying the feasibility of converting the civilian international airport in northeast Syria into an airbase for its expanding aerial operations on behalf of the Bashar al-Assad regime.

The Syrian Observatory for Human Rights on Tuesday night cited activists as saying that in recent days they spotted Russian officers and engineers arriving at the airport in the Hasakeh city of Qamishli, where both Kurdish and regime security forces maintain an uneasy power-sharing agreement.

Russian officials were conducting studies on the airport with the aim of bolstering its defenses and expanding the facility so that it can be used by Russian fighter jets and cargo planes, the monitoring NGO added.

Meanwhile, the activist Local Coordination Committees claimed that a delegation of Russian troops had flown into Qamishli International Airport.

The group added that the Russian military delegation proceeded to deploy to the nearby Regiment 154 base, which serves as a defensive line for the airport and is equipped with radars, anti-aircraft guns as well as artillery batteries.

While the LCC said no information was leaked on what operations the Russian would be conducting, the activist group’s sources did assert that the Russians would deploy only in regime-controlled areas of Qamishli, and not areas managed by the Kurds.

Kurdish internal security forces (Asayesh) control large swathes of Qamishli and its surrounding eastern and western outskirts, while pro-regime forces maintain a presence in the center of the city, as well as the nearby airport and Regiment 154 bases to the south.

The Syrian regime has kept up public appearances of maintaining control over the northeastern Syrian region, even as the Kurds have moved increasingly toward autonomy amid tense non-aggression agreements with the remaining pro-Assad forces.

In January 2014, Kurdish authorities declared the formation of three self-ruled cantons (Cizire, Afrin and Kobane) under the Democratic Self-Rule Administration of Rojava, which has been dominated by the Democratic Union party (PYD) and its People’s Protection Units (YPG) militia forces.

The political reorganization was not recognized by the Syrian regime; however, it has become a de-facto reality, especially since pro-government forces withdrew from most Kurdish-populated regions in 2012, with the exception of Qamishli and the provincial capital Hasakeh 75 kilometers to the south.

Syria’s Kurds have been militarily ascendant in the past year rolling back ISIS in the Hasakeh province as well as in the Kobane region.