You are here: Home / MidEastGulf / Russia confronts the Gulf states on Syria 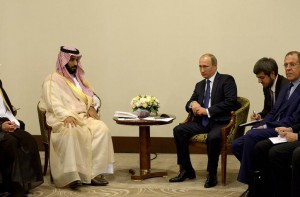 The recent meetings of Russian President Vladimir Putin with Gulf states officials in Sochi have been much more confrontational than what was reported, writes Stratfor, the Texas-based global intelligence company.

Russian President Vladimir Putin chose the Formula One Russian Grand Prix in Sochi (always a strong magnet for Gulf Arab royals) as the backdrop for a set of unavoidably uncomfortable discussions with Saudi Deputy Crown Prince and Defense Minister Mohammed bin Salman and Emirati Armed Forces Supreme Commander Sheikh Mohammed bin Zayed al-Nuhayyan on Sunday. Both the official statements and the Gulf Arab press coverage emanating from these meetings were noticeably tame, stressing cooperation and continued talks toward a settlement on Syria.

Press statements aside, this is obviously a tense time for Russia-Gulf relations. After all, Moscow is doubling down on its support for Iran’s main allies in the Levant at a time when the Gulf Cooperation Council states are increasingly unimpressed with U.S. support for a rebel campaign designed — at least, from the Gulf Arab perspective — to push back against Iranian influence in the region. Russia understands perfectly that its actions in Syria will naturally compel the Gulf states to ramp up their own support for the rebels to even out the playing field. A discussion on parameters was thus in order.

Stratfor sources have indicated that the sit-downs in Sochi were much more confrontational than what has been implied in mainstream media. The main message Putin wanted to get across was that there would be serious consequences should the Gulf states include man-portable air defense systems in their plans for augmenting rebel support. From Moscow’s perspective, Russia sending SA-22 surface-to-air missiles to Syria to provide air defense cover to Russian forces in country (never mind that the rebels and Islamic State lack airpower) is fair, but rebel sponsors putting surface-to-air missiles in the hands of militants willing to shoot down Russian planes is not.

This is, in fact, the same message that the Americans have issued to the Saudis and other Gulf allies: Surface-to-air missiles are a red line. The United States learned this lesson the hard way from its proxy battles during the Cold War and have expended a lot of time, money and energy already in trying to track down, buy up and destroy thousands of surface-to-air missiles in Afghanistan and Libya for fear that they could fall into unfriendly hands and bring U.S. planes down from the sky. Weapons provided to various anti-government militant groups have fallen into the hands of jihadist groups such as the Islamic State and Jabhat al-Nusra. The United States, which has a number of combat and reconnaissance aircraft operating in Syria, does not want man-portable air defense systems to fall into the hands of the groups its aircraft are attacking.

Judging from the footage our military analysts have observed of weapons supplies in Syria, it appears that the Saudis have been respecting the U.S. directive for some time now, assuaged to some extent by the heavy flow of anti-tank guided missiles such as the U.S.-manufactured BGM-71E TOW systems, into Syria. In fact, some have even argued that the Russians were compelled to intervene in Syria because of the effectiveness of the TOW missiles and the battlefield advantage they provided to anti-government militant groups. Whether the Saudis will continue to respect the red line on man-portable air defense systems, however, remains to be seen. There are already reports that the Saudis are sending an additional 500 TOW missiles to Syria in an effort to blunt the current Russian-led offensive.

Saudi Arabia is not about to deliver the rebel factions it has been sponsoring to the negotiating table with Russia while Moscow fortifies the loyalists at the rebels’ expense. And Russia knows it must to be careful with the Saudis as it strengthens its alliance with Iran. The threat of mission creep, the building proxy nature of the war and the risks of fueling a battlefield heavily populated with Islamist militants strongly parallel the unraveling of the Soviets in Afghanistan. The fact that the Saudis played an integral role not only in supplying Stinger surface-to-air missiles to Afghan rebels in the 1980s, but also in funneling money through charities and humanitarian aid to back Chechen militants in Russia during the 1990s cannot be far from Putin’s mind. The recent issuance of a fatwa by 52 Saudi religious academics and clerics calling on able-bodied men to answer the call of jihad and join the militants facing Russian forces in Syria only underscores Russia’s concerns.

One might think that the growing confrontation between Russia and Saudi Arabia would allow at least for a bargain of sorts over energy to cut down friction by coordinating a production cut to bring the price of oil back up and benefit both producers. This is still highly doubtful from our point of view, despite an uptick in energy talks between the two. Russia is pumping at a post-Soviet high of 10.7 million barrels per day, while the Saudis are holding steady at around 10.2 million barrels per day. Neither appears willing to cut back production and make more room for the Iranians when they re-enter the market early next year. Besides, the Saudis still have financial room to make larger spending cuts and increase borrowing and are rather delighted to see U.S. shale producers hobbled in the current price environment.

The Gulf states may be unsatisfied with the United States, but the geopolitical environment still dictates that confrontation — rather than cooperation — will drive Russia-Gulf relations. (Euractiv)