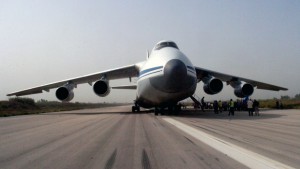 Russia is building an airstrip in the Syrian government’s stronghold Latakia province, and has brought hundreds of technicians and military advisers to the site, a monitor said on Sunday.

The claim comes as Washington accuses Moscow of a military build-up in Syria, where Russia has backed President Bashar al-Assad’s forces against an uprising of more than four years.

The monitor, which relies on a network of civilian, military and medical sources inside Syria, said “the Russians are preventing Syrians, whether military or civilian, from entering the area where they are building the runway”.

The airport is currently used by aircraft that spray crops with pesticide.

Russia is a staunch ally of the government in Damascus and maintains a naval facility in Tartus province.

It has made no secret of its support for Assad’s government, including continuing weapons supplies, but has rejected claims of a recent military build-up inside Syria.

But US officials this week said two tank-landing ships had arrived recently at the Tartus base, and that at least four transport flights had landed an airport in Latakia.

They also reported the arrival of dozens of Russian naval infantry and the installation of temporary housing sufficient for “hundreds of people” at Latakia airport, along with portable air traffic control equipment.

On Friday, Cypriot officials said Russia had issued an alert for Cyprus to divert aircraft next week because it is planning military exercises off the Syrian coast.

And on Saturday, Syrian state media reported the arrival of two Russian planes at the airport in Latakia, saying they were carrying humanitarian aid.

Syrian state media sporadically reported the arrival of Russian humanitarian aid, but the flights were the first mentioned by official news organisations since the claims of a military build-up.

More than 240,000 people have been killed in Syria since the conflict began with anti-government protests in March 2011.

The government has lost large swathes of territory to rebels and militants such as the Islamic State group.