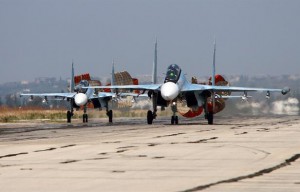 Russia has bombed targets in southern Syria for the first time in a dramatic expansion of its aerial campaign to a hotly-contested region near Israel’s Golan.

The Syrian Observatory for Human Rights reported Thursday morning that “what appeared to Russian jets” conducted a series of strikes on the villages of Tal al-Hara, Tal al-Antar, Kafar Nasij and Tal Aqraba, all of which are located approximately 15 kilometers east of the Golan demarcation line.

The SOHR report comes after a number of pro-rebel outlets had claimed starting Tuesday that Russian strikes had targeted positions in southern Syria, while Iran’s semi-official Fars News said the strikes took place in the Quneitra province bordering Israel as well as Daraa.

Meanwhile, the pro-Damascus daily Al-Akhbar touted the start of Russia’s aerial campaign in southern Syria, which comes two weeks after Syrian regime forces backed by a sizeable Hezbollah-contingent reversed a rebel offensive in northern Quneitra and gained ground near Israel.

“Yesterday the Russian air force began striking the bases of armed groups in the south of the country to help the army recapture a large number of areas in the Daraa, Suweida and Quneitra provinces,” the newspaper reported Thursday morning.

The newspaper, which closely supports Hezbollah, said the Russian step comes as a rejection of “analyses and predictions” that Russia would not strike southern Syria because “it is a primary theater for Free Syrian Army groups and because Moscow had agreed with Israel not to approach its airspace.”

“The Russian strikes on [Tuesday] and Wednesday evening have confirmed that the quadripartite coalition [sees] everyone bearing arms [against pro-Assad troops as] an enemy of the Syrian state,” the report added in a rejection of Russia’s original claim that it was intervening in Syria to fight ISIS, which has a meager presence in southern Syria.

Al-Akhbar cited a source a source in the FSA-affiliated Southern Front as saying that the Russian raids had “hit their targets with high precision.”

The newspaper, meanwhile, quoted a regime source as saying that the Syrian army is expected “in the very near future to [activate] a number of fronts in the south.”

The Southern Front’s offensives against the regime in the Daraa province ground down in the summer after its “Southern Storm” campaign failed to seize the provincial capital.

The Southern Front launched the offensive on Daraa in late June following a series of stunning successes in the southern Syrian province in the spring.

The coalition had seized the Nasib border crossing with Jordan in early April and the regime’s 52nd Brigade base northeast of Daraa on June 9.

The regime, for its part, had failed in its bid in early 2015 to seize territory in Quneitra and northern Daraa after an offensive backed by Hezbollah and Iran was turned back by rebels.