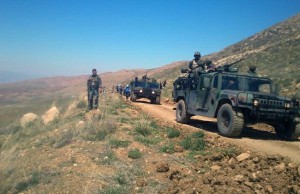 Moscow has asked Lebanon to provide military intelligence on its flashpoint border with Syria, according to a London-based daily.

Alaraby Aljadeed reported Thursday morning that Russia requested the coordinates of Lebanese Armed Forces (LAF) and Hezbollah positions on Lebanon’s side of the border as well as intelligence on armed groups present on the Syrian side.

Hezbollah since the spring of 2013 has conducted a series of offensive on behalf of the Syrian regime against rebel groups located near Lebanon’s border starting from Qusayr in the north stretching downward to Zabadani east of Lebanon’s Bekaa Valley.

The Lebanese army, in turn, has bolstered its defensive positions in the eastern border region, regularly shelling militant positions.

Alaraby Aljadeed did not report that the Russian move was made in consideration of potential aerial strikes along Lebanon’s border, saying instead that Moscow wanted the information as part of its defensive measures for its military positions north of Lebanon.

“Russia made the request because it intends to form a broad security wall to protect the Russian naval base in Tartous,” the article said.

Russian diplomatic sources in Beirut told Alaraby Aljadeed that Russia requested military information from Syria’s neighboring states “within the framework of countering terrorism and the need for cooperation between various states in that field.”

However, the sources stressed that the request had not passed through the Russian Embassy in Beirut “but through the open military channels between the two countries.”

“Normally, [such] requests pass through the competent security apparatuses without the need to refer to the… government,” the source explained.

Russia began its aerial bombardment campaign in Syria on September 30, striking rebels in the Homs, Hama, Latakia and Idlib provinces while also claiming to have hit ISIS targets further east.

Despite Moscow’s claim it was hitting ISIS, most of its airstrikes have been conducted in coordination with Syrian regime ground operations against rebels in the northwest of the country.