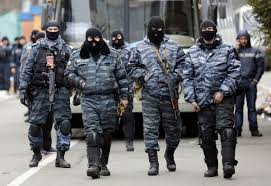 Highlighting a new terror threat to Russia raised by its air campaign in Syria, security officials said Monday they have thwarted a planned attack on Moscow public transport system by militants trained by the Islamic State group.

Sunday’s arrest of several terror suspects — some of whom, intelligence officials say, were trained by IS in Syria — has brought back memories of the string of deadly bombings that struck the Russian capital just a few years ago.

President Vladimir Putin has acknowledged the new danger, but insisted that launching the Russian airstrikes in support of Syrian President Bashar Assad’s army was necessary to fight IS and other militant groups before they pose an even bigger security challenge to Russia.

“If we just stood by and let Syria get gobbled up, thousands of people running around there now with Kalashnikovs would end up on our territory, and so we are helping President Assad fight this threat before it reaches our borders,” Putin said in an interview with Rossiya state television broadcast Sunday.

“We must take pre-emptive action,” he said. “Of course, there are risks, but let me say that these risks existed anyway, even before we began our operations in Syria.”

Russian authorities have said that about 2,400 Russians have joined the IS militants and voiced concern that they may pose a threat when they return home.

The latest arrests may play into Putin’s hands, proving his point that IS pose a major threat to Russia and the air raids are a necessary response to the challenge.

A nationwide poll of 1,600 conducted earlier this month by VTsiOM polling agency found that two thirds of respondents supported the Kremlin’s decision to launch airstrikes in Syria. The poll had a margin of error of no more than 3.5 percentage points.

The Federal Security Service, Russia’s main domestic security agency, said in Monday’s statement that a device with five kilograms (11 pounds) of explosives was found in a Moscow apartment rented by the suspects.

The FSB said some of the suspects had been trained by Islamic State militants and were plotting a terrorist attack on Moscow’s public transport. The agency didn’t immediately give further details.

Authorities did not say how many people were detained but said “between six and 11 people” frequented the apartment. The men had arrived in Moscow “well before” Russia began carrying out airstrikes in Syria on Sept. 30, the FSB said.

Moscow and other Russian cities have seen numerous terror attacks linked to Islamic militants from Chechnya and other restive provinces in Russia’s volatile North Caucasus.

Doku Umarov, a Chechen warlord who claimed responsibility for those bombings, also threatened but failed to strike the 2014 Winter Olympic Games in the Russian Black Sea resort of Sochi.

Umarov was reported dead in March 2014 by the militant group he led, the Caucasus Emirate, and since then some of its members have sworn loyalty to Islamic State.