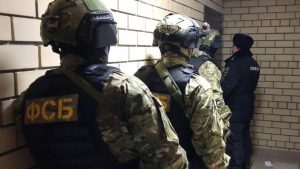 The security operation took place in the Black Sea regions of Krasnodar, Crimea, Rostov and Karachayevo-Cherkessia. Authorities identified the suspects as members of Takfir wal-Hijra, a group that Russia banned as extremist in 2010.

“The interregional extremist community’s ‘takfiri’ ideology provides a theological justification toward [crimes against] ‘infidels’ including Muslims as well as the need to create a theocratic Islamic state called ‘caliphate’,” the FSB was quoted as saying.

The FSB said its officers seized a suicide belt, explosive devices and automatic weapons in the forest of the republic of Karachayevo-Cherkessia.

Courts have sanctioned the arrests of 10 suspected leaders and members of the Islamist group, Interfax cited the FSB as saying.

A Rostov-on-Don court ordered four of the suspects to be held in pre-trial detention for two months, according to state-run TASS.

News of the latest security operation comes amid reports of Turkey arresting five Russian citizens attempting to cross the country through the Syrian border.