You are here: Home / MidEastGulf / Russia and US agree to start military cooperation to combat terrorism in Syria 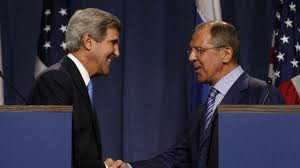 Russian Foreign Minister Sergey Lavrov announced that the US and Russia agreed to start of military cooperation in the context of the war on terrorism in Syria.

Lavrov expressed hope that this agreement will help in forming a united front against terrorism.

The Russian diplomat said Russia will continue to support the Syrian government, hoping that “this tentative agreement will help in making progress towards achieving the goal set by Russian President Vladimir Putin when he called for the formation of a really united front to fight terrorism.”

Lavrov said that Saudi Arabia’s possible ground operations in Syria were not discussed during the International Syria Support Group (ISSG) meeting in Munich.

“There was no talk of this, so I cannot tell you anything of who was planning to send whom where,” Lavrov added.

Ahead of a meeting with Saudi Foreign Minister Adel al-Jubeir, Lavrov hoped that the agreement which was reached in Munich on Syria will be turned into practical steps.