You are here: Home / Mediterranean / Russia and Turkey are engaged in a delicate dance in the Eastern Mediterranean 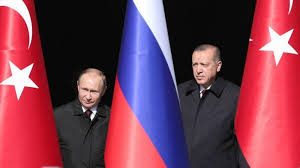 Libya’s call seeking military assistance from Turkey and the latter’s prompt announcement on December 26 of its readiness to meet the request as early as January is no doubt a carefully choreographed sequence of events, like reported by counterpunch.org.

Tripoli and Ankara are moving in tandem. The day before the Turkish announcement, President Recep Erdogan made a “secret” day-long visit to Tunis to streamline a regional axis comprising Turkey, Qatar, Tunisia and Algeria over the Libyan situation. In the Turkish perspective, if Libya falls under dictatorship (as in Egypt), a similar threat would arise to the democratization (“Arab Spring”) in Tunisia as well.

Turkey and Libya are taking care that they have regional support while countering the renegade general Khalifa Haftar’s offensive to capture Tripoli. Haftar has the backing of Russia, Egypt, the UAE and Saudi Arabia, which is a formidable combination.

Erdogan has openly alleged that thousands of mercenaries from Russia and Sudan are operating on Haftar’s side. The UAE keeps a base in Libya from which drones operate. Effectively, Erdogan has highlighted Moscow’s doublespeak on “regime change.”

The Russian predicament comes out clearly in the defensive remarks made by the Kremlin spokesman Dmitry Peskov in Moscow on December 26. Peskov was hard-pressed to give a cogent explanation for the Russian mercenaries fighting in Syria. (Washington has alleged that Moscow has also lately deployed regular troops to Libya.) All he’d say was that “‘citizens of different countries act as mercenaries in various parts of the world’ and it is impossible for a country to control the movement of all its citizens.” Just not good enough.

Prima facie, if Erdogan deploys troops to Libya following parliamentary approval on January 8-9, that could pit Turkish forces against Russians. But neither Turkey nor Russia wants such a confrontation that could spoil their warming ties.

Erdogan said on December 22 that fleeing the Russian-Syrian bombardment in Idlib, some 80,000 people are heading toward Turkish borders. Erdogan’s key aide, Ibrahim Kalin, disclosed on December 24 that Ankara has asked Russia to (re)establish the cease-fire in Idlib and “They [Russians] told our delegation that they will make an effort to stop the regime’s attacks within 24 hours.”

Moscow holds an “Idlib card.” The point is, it is highly improbable that Moscow would withdraw support for Haftar. Moscow sees a window of opportunity to become the most influential player in Libya if Haftar captures Tripoli.

The renegade general might have been the CIA’s asset in the past, but today he’s “our s.o.b.,” Washington having taken the window seat in the Libyan conflict. Haftar’s other backers are Egypt and the UAE, and Russia overshadows them in military capability.

The Russian intervention in Libya is “self-financing” insofar as Saudis are bankrolling Haftar. Over and above, Russia is also serving the interests of the Egyptian, Saudi and Emirati regimes who are petrified that democratic transformation of Libya (on the lines of Tunisia or Algeria) may eventually lead to the rise of the Muslim Brotherhood, as happened once in Egypt.

Succinctly put, a “strong man” ruling Libya with an iron hand is what suits Russia, Egypt, the UAE and Saudi Arabia. Moscow is pushing a big agenda in Libya. Apart from Libya’s vast oil reserves, the country can offer Russia bases along NATO’s “soft underbelly” in the Mediterranean, which would supplement the bases in Syria and help to change the geopolitical dynamics of the Eastern Mediterranean. (See “Haftar Is Russia’s Stone to Kill Many Birds,” Daily Sabah, December 27, 2019.)

Furthermore, a towering Russian presence in Libya would compel the European Union to negotiate with Moscow over the issue of refugee flow from north Africa to Europe, which would lead to a constructive engagement, EU sanctions notwithstanding.

Clearly, it is crucial that Russian and Turkish ambitions in Libya are reconciled and a flashpoint avoided. A Turkish intervention would complicate Russia’s best-laid plans for the Eastern Mediterranean. On the other hand, Russia is the only power standing in the way of the Turkish ambitions to reclaim the glories of its Ottoman past history or to mitigate its regional isolation by breaking the phalanx of hostile powers that are ganging up against it in the Eastern Mediterranean—Greece, Cyprus, Israel and Egypt—with backing from the U.S. and EU.

Turkey’s considerations are similar to Russia’s, ranging from oil to geopolitics. (Read the Turkish narrative featured by the state news agency Anadolu on Erdogan’s grand strategy: “Turkey’s New Geostrategy From Tripoli to Doha: ‘Defending an Area.’”)

The Russian President Vladimir Putin, who is due to visit Turkey on January 8, is sure to try to dissuade Erdogan from his present path. In the final analysis, what remains to be seen is how they cooperate in Libya as they have been doing in Syria.

The Eastern Mediterranean holds the “triple gates” of Europe, Africa and Asia. The great power rivalries are traceable to at least 1453 when Ottoman Sultan Mehmet II captured Constantinople.

The noted Italian scholar and writer Francesco Sisci wrote recently on the riveting history of the Eastern Mediterranean and touched on the Turkish-Russian rivalry:

“Turks and Russians were rivals for centuries, contending for control and access to the Mediterranean. The Turks had basically total control of the Black Sea and Mediterranean Sea until after they were clearly defeated in the siege of Vienna in 1683. In the following decades, Russia moved to push back the Turks from the Sea of Azov, and basically a century later they defeated the Crimean Khanate and established themselves on the north shores of the Black Sea.

“The present slow but steady encroachment of Russians and Turks in Libya seems to follow the ancient pattern, in a rare historical moment in which Russians and Turks are getting along better with one another and both wary of other threats.”