You are here: Home / Analysis / Russia and the West join together in international effort to establish peace in Libya 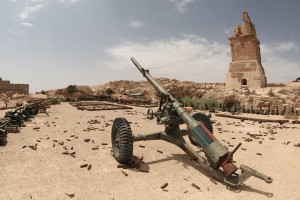 The recent events in Libya hit headlines. Alarm bells about militants’ expansion in Libya are ringing. The Islamic State (IS) has strengthened its position in the stronghold of Sirte, a key city less than 400 miles away from the Italian island of Sicily, which now has become a new focal point for the group.

The massive Sirte Basin is the centre of Libya’s oil industry. About 80% of Libya’s accessible oil is located there. Although IS militants do not control these reserves, they can disrupt production, or launch an attempt to take control of the resources for themselves. The group has already increased its influence by absorbing jihadists from the al-Qaeda-linked group Ansar al-Sharia. It is gradually expanding its reach out from Sirte and towards the rest of the surrounding region. About 125 miles of territory along the Libyan coast is de facto under IS control. Last month, the Libyan government warned that IS could seize most of the country if it is not halted soon.

It is estimated that there are 6,000 Islamic State fighters in Libya. IS’s consolidation of territory in Sirte gives the group a foothold in close proximity to Europe – and near a number of potentially fragile neighboring states. The international community is concerned that the Islamic State could further destabilize nearby countries such as Algeria, Tunisia and Egypt. Italy and Spain are particularly worried because Libyan insecurity could affect their oil and natural gas interests if the IS group starts to advance westward. There are at least 400,000 illegal immigrants waiting in Libya to cross to Europe. The situation in the country is a security threat of global scale.

The five permanent members of the UN Security Council have agreed to supply Libya’s internationally recognized government with arms to fight the Islamic State group and other armed factions in the divided country.

Top officials from Russia, China, the UK and France along with some 15 other countries and international organizations said in Vienna on May 16 that they will approve exemptions to a UN arms embargo on Libya to supply weapons to the government of Libyan Prime Minister Fayez al-Sarraj, head of the UN-backed “Government of National Accord” (GNA).

A joint statement from the attending countries drew attention to Libya’s role as a major transit point for migrants trying to reach Europe. “We look forward to partnering with the GNA and neigbouring countries to tackle the threat posed throughout the Mediterranean and on its land borders by criminal organizations engaged in all forms of smuggling and trafficking, including in human beings,” it reads. “We are ready to respond to the Libyan government’s requests for training and equipping the presidential guard and vetted forces from throughout Libya,” the statement stresses.

The UN arms embargo prevents Libya from purchasing fighter jets, attack helicopters, tanks and munitions. The Prime Minister of the GNA, Fayez Sarraj, said he would submit a list of weapons his government wanted to the UN Security Council for approval.

The Vienna meeting also agreed to train the presidential guard, drawn from police and army units from around the country, to protect government installations and vital infrastructure. In the meantime, the GNA is forced to rely on militias from the capital and the allied formations from the city of Misurata.

The crisis-hit country has been in chaos since NATO-backed forces overthrew long-time ruler Colonel Muammar Gaddafi in October 2011. It’s an open secret that weapons from Libya are being smuggled as far as Mauritania and Somalia. Those that remain in Libya have largely been seized by the militias, as well as the Islamic State group.

In March the UN-backed GNA arrived to Tripoli defying threats by rival factions that it was not welcome in the capital. It is supposed to replace the two rival administrations – one based in Tripoli, the other in the eastern city of Tobruk dominated by General Khalifa Haftar, who has returned to Libya from exile in the United States. The three are bickering over who is in charge.

The Tobruk-based parliament, which is the one recognized by the international community, still hasn’t formally approved the UN deal. While some members support Serraj’s government, others outright reject it, viewing it as a compromise to their Tripoli rivals. GeneralKhalifa Haftar has remained silent on the deal and many of his loyalists oppose it. Analysts fear that weapons provided to the GNA could fall into the hands of IS militants and lead to clashes between factions loyal to the internationally recognized government and the General.

Earlier this month there was a series of deadly skirmishes between Haftar’s forces and militias from Misurata in Zilla, south of Sirte, where the General had said he had sent his soldiers to fight Islamic State.

The international community seeks to integrate General Haftar in the government structures and avoid a split of the country.

It should be noted that Turkey is on the other side of the fence than the international community. It is supporting the Muslim Brotherhood in Libya.

It has been reported that theLibyanbranches of the Islamic State, al–Qaeda, and theMuslim Brotherhood are in talks to form a shared governing council (a “mega-merger”).

As in Syria, Turkey stands in the way of international effort to bring peace to a war-torn country.

Russia will be ready to consider the possibility of arms deliveries to legitimate Libyan government only if the UN Security Council approves the lifting of weapons embargo in force since 2011, the Russian Ambassador to Libya said on May 23. “The issue of lifting the weapons embargo was discussed. It is premature to say that the embargo will be lifted soon as it should be decided by the UNSC and involves consideration of a wide range of criteria and conditions,” stressed Ivan Molotkov, who took part in the meeting. “The issue will be decided by the UNSC, and if Russia supports at least a partial lifting of the embargo that would mean that we will be ready to go ahead with plans to deliver arms to Libya,” he added.

Russia’s Deputy Foreign Minister Gennady Gatilov said the issue of lifting an arms embargo from Libya can be discussed only after political processes inside the country are completed.

This century three Western foreign military interventions in Iraq, Afghanistan and Libya have been aimed at government change and, actually, all have ended in disaster. The parallels of Libya with Iraq and Afghanistan are uncomfortably suggestive. No matter what kind of regimes has been toppled, the ensuing lack of law and order has brought about much more trouble and instability affecting adjacent states. In each of these “nation building” cases military have been dispersed, governments disbanded, the judiciary dismantled and armed gangs and militias left free to run riot spreading anarchy around. Little or no attempt was made to replace the created mess with a new order.

This time it’s different. It’s an international effort applied according to the norms of international law, not a US-led Western unilateral endeavor. Russia, the West, Middle Eastern and North African international organizations are in the same boat facing the common threat.

Germany’s Foreign Minister has stressed the importance of Moscow’s role in dealing with the world’s most serious conflicts and crises. Saying that “isolation” is not a policy, Frank-Walter Steinmeier predicted that Russia’s “involvement” might be necessary to stabilize Libya. “I venture to predict, in the efforts to stabilize Libya, we will also need Russia’s involvement,” he stated.

Mr Steinmeier hit the nail right on the head.

Like in Syria, the West needs Russia to tackle a major security problem.