You are here: Home / MidEastGulf / Russia and Iran seek control of Syria and Iraq 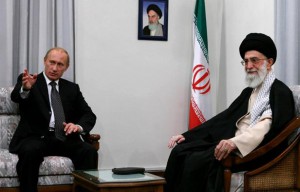 Two years ago, Russian military arrangements were activated to prevent the fall of Bashar al-Assad’s regime in Syria in the form of specialists, consultants and uninterrupted arms shipments. Russian interference back then coincided with an unprecedented semi-Iranian invasion of Syria.

Iranian generals and forces from its Revolutionary Guards carried out most of the combat missions along with the Lebanese Hezbollah, and Afghani and Iraqi groups. Russians were on the back lines, and Iranian forces on the front line.

U.S. reports highlight new, large-scale Russian activity, with potentially huge airlifts, as well as shipments of large housing units for around 3,000 Russian soldiers. Moscow wants to convince the world that it is not invading Syria, and that current events are merely a continuation of the defense agreement with the Assad regime. However, the scale of the activity is a lot larger now.

Russia may see in the current situation a precious opportunity to launch a full-scale war to wipe out the moderate national Syrian resistance. Iranian and Russian forces will then be able to take full control, given that Assad is just a fig leaf. Moscow wants to achieve what it failed to do with negotiations.

Moscow wants to convince the world that it is not invading Syria, and that current events are merely a continuation of the defense agreemen

Given that the U.S.-led coalition is fighting terrorist organizations only, Russia and Iran now want to liquidate the national opposition and take over Syria, which is very important to rule Iraq. We are about to enter a new, dangerous chapter in the Syrian war.

Washington’s attempts to embarrass Moscow and make it reveal information about its interference will not stop Russia and Iran from using the war against the Islamic State of Iraq and Syria (ISIS) to take over Syria. The interference of Russia in Syria as a fighting force will provoke the Arab and Muslim worlds, and bring back memories of the Soviet invasion of Afghanistan.

Its interference will push thousands of youths to join terrorist and extremist organizations to defend Syrians. Then countries such as the United States will not have any pretext to convince the world to fight extremism. It will not be possible to reassure Middle Eastern countries about the Iranian-Russian alliance, which wants total control of Iraq and Syria.

So as not to ruin the nuclear negotiations, Washington did not confront or criticize Iran for sending, for the first time, forces beyond its borders to fight in these two countries. If conflict in Syria remained between Syrian parties, matters would have been resolved long ago, either with Assad accepting a political solution according to the Geneva I conference, or with the fall of the regime and the establishment of a political system that includes all Syrian components. Russian interference will prolong and widen the conflict.