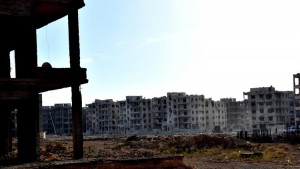 Russia’s Defence Ministry said Friday that militants in the war-torn Syrian city of Aleppo have been using chemical weapons.

The accusation came amid speculation that Russia is preparing to provide air support for the Syrian army to capture rebel-held parts of Aleppo. Much of the northern Syrian city is controlled by fighters linked to the UN-designated terrorist organization al-Qaeda.

Russian analysis of unexploded artillery shells from Aleppo’s district 1070 in the south-western edge of the city has revealed evidence of toxic agents including chlorine and white phosphorus, ministry spokesman General Igor Konashenkov said in comments carried by the Interfax news agency.

Rebels were using such ammunition against civilians and Syrian state troops, Konashenkov said.

The Syrian National Coalition called for a more detailed investigation into the usage of such weapons and said Russia’s accusation is actually a “stark condemnation” against Iranian militia groups that “have used munition stuffed with poisonous gas on several areas in Aleppo.”

In north-eastern Syria, Kurdish-led forces made territorial gains against another UN-designated terrorist group, Islamic State, a monitoring group reported Friday. The forces aim to retake the city of al-Raqqa, which has been under Islamic State control for two years.

The US-backed Syrian Democratic Forces (SDF), which also includes Arabs and members of other regional ethnic groups, have liberated 19 villages and farms in the rural north of al-Raqqa since the start of an offensive towards the city on Sunday, the Syrian Observatory for Human Rights said.

The offensive is being supported by a US-led air alliance, which on Friday bombed Islamic State targets on the outskirts of al-Raqqa, the Observatory reported.

“The SDF forces are trying to move deeper into the northern countryside of al-Raqqa,” said the watchdog’s head, Rami Abdel-Rahman.

“Their main aim is to secure safe roads for their fighters before the battle against the city of al-Raqqa starts,” he told dpa.

Kurdish sources said Friday that their forces had opened a “safe passage” near the town of Ain Issa to help locals escape from areas where clashes are taking place between the SDF and Islamic State. Ain Issa is located between the border town of Tel Abyad and al-Raqqa.

Kurdish sources said the first phase of the al-Raqqa offensive has finished and the SDF command is preparing for the second.