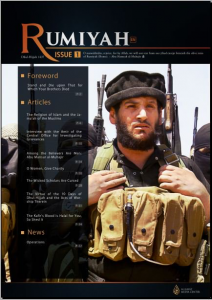 On September 6, the Islamic State (IS) launched the first issue of their new online magazine, Rumiyah. Using the classical Arabic word for Rome, the title references the Western empire’s downfall.

IS also publishes “Dabiq,” a glossy electronic publication. In Islamic eschatology, Dabiq, a small town roughly 8km south of the Syrian border with Turkey, is one possible site of a future apocalyptic battle between “the Romans” and a Muslim army of “the best people of the earth,” according to a saying of the Prophet Muhammad regarding the end of days.

The first issue of the magazine came out weeks before Turkish-backed FSA rebels captured Dabiq on October 15, Syria Direct reported. The cover subject is Abu Mohammad al-Adnani, the Islamic State’s spokesman and number two in command after Abu Bakr al-Baghdadi. Al-Adnani was killed one week before the magazine’s release. The second issue’s cover story details “how to carry out individual knife attacks.”

Rumiyah bears many of the same trappings as Dabiq, with similar layouts, high-resolution photography and appeals to a Western audience. IS publishes Rumiyah—like Dabiq—in seven languages. Arabic is not one of them.

Unlike the Islamic State’s online Arabic content, Rumiyah focuses on European fighters, individuals who joined the caliphate or carried out domestic attacks.

“Attacks in Europe, in particular, take center stage,” says Zeid a-Thabit, the pseudonym of a member of pro-opposition news outlet Sound and Picture who lives in Deir e-Zor under Islamic State control.

But a-Thabit calls Rumiyah’s content “softer,” noting the “warmer profile pieces…to attract the Western reader.” The Islamic State fighters, he tells Syria Direct’s Noura al-Hourani, “know how to present themselves, and know how to keep the Western reader far away from the reality on the ground.”

Q: IS published their new magazine, Rumiyah, in seven languages. Arabic is not one of them. What do you believe was the motivation here?

This magazine is geared towards a Western audience. It’s distributed among foreign fighters and their families living in Syria, Iraq and abroad. It’s rarely found in the hands of a native Syrian.

Q: Why does IS feel the need to make this distinction between Western and  Arab readers? Why don’t they just publish bilingually?

The Islamic State is not blind to the cultural differences between their Western and Arab audiences, and they’ve tailored their media content accordingly.

The Arabic content is undoubtedly more violent than its English counterpart. It largely focuses on IS triumphs: their attacks, killings and conquests. Attacks in Europe, in particular, take center stage. That’s deliberate. It’s an intimidation tactic used to strengthen their grip on power at home by highlighting and projecting their reach abroad.

When it comes to their English content—whether that is with Dabiq or with Rumiyah—IS takes a markedly different approach. It’s much more of a call to arms. Yes, they do delve into the heroism and accomplishments of the Islamic State, but it’s done with a softer touch. They put warmer profile pieces of Islamic State fighters in each issue, which is done to attract the Western reader. The Islamic State knows how to present themselves, and they know how to keep the Western reader far away from the reality on the ground.

IS published Rumiyah electronically and in several different languages in order to maximize the magazine’s reach, making it accessible to all of its members regardless of nationality.

Q: I want to go back to something you just mentioned, namely how the Islamic State presents itself to its Western audience. How do they try to connect with their Western readership?

Rumiyah is different from other IS publications. It’s motivational and meant to bring people to action. It not only talks about past instances of jihad, it discusses how to individually carry out attacks.

The Islamic State knows how to tailor its content. When writing for the West, they focus on European fighters, individuals who left Europe and came to live in IS lands. The magazine highlights the accomplishments of these European fighters and how they are righteous and justified in their actions.

Discussion of future payoff really hits home with the readership. For instance, the magazine highlights the narrative of the fighter who started as a normal foot soldier but steadily rose to become an important member of the organization because of his commitment and devotion to the Islamic State. This is how they draw you in.

Q: You live in IS territory. Do you notice a difference in how the Islamic State treats its foreign and local fighters?

There’s absolutely no comparison. I can point to a handful of cases—maybe 10 at most—of Syrians who receive the kind of special treatment that foreigners get, but this only happens because these Syrians have a high impact on the organization.

In terms of preferential treatment, the list goes as follows: Westerners and Iraqis are at the top, then come the rest of the non-Syrian Arabs and finally are the Syrians at the bottom of the totem pole.

Differences in status and treatment can be seen everywhere from the fighters’ houses and cars to even the ways they dress. There are even special schools for the children of Western IS members that Arab children are not allowed to go to. The Islamic State announced that they were starting a university two years ago, but this was nothing more than a media ploy.

Q: The Arab Bank published a report earlier this month showing that foreign fighters who join the Islamic State on average come with a high level of education. Do you believe that IS takes this into account in their media strategy?

There are very few individuals in the Islamic State with a high level of education, but IS invests a lot in these people. IS makes sure to train them and to offer them everything that they may need. They rely heavily on their few educated members, especially when it comes to their media and propaganda efforts. Here, they try to project the appearance of culture and enlightenment in order to attract as many people as possible.

The majority of fighters have pretty average levels of education. Some even have warrants out for their arrest in their home countries. IS deliberately reaches out to this target group in their promotional materials, encouraging them to leave their countries to come fight with the Islamic State.

But I’ve also met a large number of IS fighters at Internet cafes who don’t even know how to use a computer. They’ll have to bring over the owner of the café to get them on a website or to send emails and messages for them on Facebook and Twitter.

However, IS generally doesn’t want even their own members to have a lot of Internet access, and many members have been arrested for this very reason. The Islamic State operates in a borderline schizophrenic way. They’ll spread ignorance and at the same time keep their members from communicating with the outside world. This is all done with the intention of imposing their control at every turn.

Not only is the IS media machine totally detached from reality, but the Islamic State also keeps its members and civilians from interacting with the outside world. The Islamic State strives to show its followers abroad that they are thriving, but this is far removed from the reality on the ground.

Q: How do the foreign recruits react when they finally make it to the supposed caliphate and see the reality on the ground?

Of course they’re surprised. This happens all the time. A number of them want to leave the Islamic State, but they’re unable to do so. Perhaps the largest limiting factor is that they aren’t well versed with the local geography and simply don’t know how to run away. New recruits will also find themselves trapped because they’re persona non grata with their home governments. They may not be allowed back in either because they’ve been stripped of their citizenship or because they will be imprisoned upon return.

As such, these new recruits have to give in to the reality: This is their life now, stuck, waiting to die in just another battle.

Q: Do you find that these individuals—those who have become disillusioned with the Islamic State—ever try to get that message out back home? Do they ever try to relay their own experiences to keep others from falling into a similar trap?

People definitely try to do just that, but it’s difficult. Like I mentioned before, IS doesn’t want its members to have unrestricted access to the Internet. In order to get on the Internet, you have to submit not only your ID but also a list of the websites that you’ll be visiting. It’s all heavily monitored.

There are constantly raids on Internet cafes. Members of IS will enter suddenly and demand that everyone put their hands in the air while they search cellphones and other electronic devices. If IS notices anyone closing their devices, that person will be arrested immediately, even if that person is an IS member. Yes, the Islamic State even monitors the Islamic State.