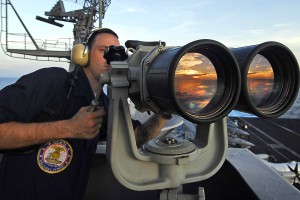 Royal Navy Rear Admiral Chris Parry called for United Nations intervention off the Libyan coast, saying migrants departing from there should be intercepted and sent back to Libya.

Speaking on the BBC’s Newsnight programme together with MEP Roberta Metsola, the former commander of the UK amphibious task force said the current situation in the Mediterranean is almost a carbon-copy of the piracy crisis off the Somali coast a few years ago.

He said a “space of humanitarian concern” should be declared off the Libyan coast and the UN needs to take over jurisdictional duties from the Libyan regime.

Rear Admiral Parry said migrant boats should be turned around close to the Libyan coast, though there needs to be differentiation between refugees and migrants because their legal status is different.

“We have to stop them getting to sea and blackmailing merchant ships and warships into taking them on board. I think there is a ray of hope, in as much, I think one of the reasons the boats are really crowded at the moment is because the Libyans and these other people sending them are running out of old boats,” he said.

“We have failed as politicians to address the issues. Year after year we find ourselves here, when the seas have gotten calmer, with boats arriving and hundreds of people drowning in our seas,” Dr Metsola said.

Dr Metsola expressed her hope that the 10-point action plan agreed upon by EU foreign ministers is implemented immediately, and that during this Thursday’s EU summit “words are translated into political action.”