You are here: Home / Mediterranean / Rome and the EU will provide funds for Libyan camps for migrants 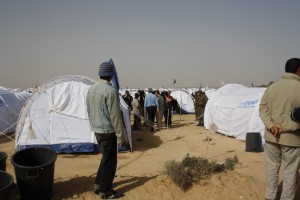 Italy will provide financing and training to the U.N.-backed Libyan government to help it fight people smuggling, the two countries’ bilateral agreement showed, part of wider European Union efforts to stem African migration to its shores.

The agreement, signed by Italian Prime Minister Paolo Gentiloni and Libyan Prime Minister Fayez al-Seraj on Thursday and seen by Reuters on Friday, says Rome and the EU will provide funds for Libyan camps where refugees and migrants are held.

EU leaders are meeting in Malta on Friday to discuss how the 28-member bloc can stop migrants before they board flimsy boats on the Libyan coast and set out across the Mediterranean for Europe. Some 4,500 are estimated to have perished attempting to cross from North Africa to Italy last year.

The Italian-Libyan agreement, which will be endorsed by all EU leaders later on Friday, says the camps where migrants would stay “until they are deported or they voluntary agree to return to their country of origin” would be managed by the Libyan Interior Ministry.

Italy would provide training to camp personnel, medicine and medical supplies for the migrants, it said. Furthermore, Italy vows broad support to the Seraj government, including for Tripoli’s “security and military institutions”.

The Seraj government is struggling to establish control amid the chaos that followed the overthrow of Muammar Gaddafi in 2011. People smugglers operate with impunity and the route across the Mediterranean is now the main gateway to Europe, with some 181,000 arrivals last year.

But humanitarian groups reject efforts to stop migrants in Libya, where they are suffering consistent and widespread abuse, including arbitrary detention, forced labor, rape and torture, a United Nations report said in December.

“Running camps in Libya would mean keeping migrants in inhumane conditions and putting them further at risk,” Carlotta Sami, a spokeswoman for the U.N. refugee agency, told Reuters.

“The European Union and its Member States need a reality check. Libya is not a safe place – there is no way this can be considered a humane approach to migration management,” said Arjan Hehenkamp of Doctors without Borders.

Armed groups have taken effective control of official detention centers for migrants amid the political chaos, and they also run their own camps, competing and cooperating with criminal gangs and smugglers.