You are here: Home / MidEastGulf / Rogue Shiite Militias: We will fight to liberate Mosul without ‘anyone’s permission’ 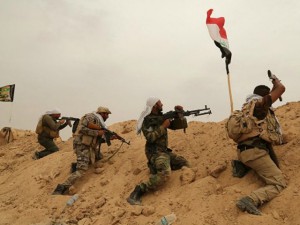 An Iranian-backed commander in Iraq who is part of a group of Shiite militias known as the Popular Mobilization Forces (PMF)has said his group does not need “anyone’s” permission to fight to retake Mosul from the Sunni Islamic State.

The leader compared the group to the killers of a revered Islamic figure whose death separated Islam into the two Sunni and Shiite sects.

Qais al-Khazali, leader of the PMF’s Asaib Ahl al-Haq (AAH) militia, called for “vengeance and retribution” against the Sunni jihadist group, prompting fears that his comments may instigate sectarian brutality against the people of Sunni-majority Mosul.

Khazali is already dealing with a strained relationship with the U.S. military. His militia had been linked to at least 6,000 attacks against the U.S. military in Iraq as of 2011 and about five years later appeared to threaten the lives of some U.S. marines deployed to Iraq.

The AAH commander’s comments about the upcoming Mosul offensive came on Tuesday, the day that marked the religious Muslim festival of Ashara.

While Muslims across the world take part in the event through prayer, voluntary fasting, parades, and marches, the day is especially important to Shiites. Some adherents of Shiite Islam participate in self-flagellation to mourn the Prophet Mohammed’s grandson Imam Hussein who was killed at the Battle of Karbala almost 1,400 years ago by forces loyal to Yazid bin Muawiyyah, Islam’s sixth caliph.

In a video posted on Kurdish news outlet Rudaw, he said:

There has been debate lately as to whether the PMF, also known as the Popular Mobilization Units (PMU) or al-Hashd al-Shabi, should participate in the offensive to recapture Mosul given that some of the Shiite militias were accused of torturing “hundreds” of Sunni fighters after they helped the Iraqi troops recapture Fallujah, in Anbar province from ISIS.

Some Shiite militias were also accused of looting and extrajudicial killings after the U.S.-backed Iraqi forces seized back Tikrit in Salah al-Din province from ISIS.

Nevertheless, the commander, in the video posted on Rudaw said:

The U.S.-led coalition seems weary to work with some of the Iran-supported PMF units, noting it “will not support units which it has concerns about, including certain Shia militia units,” according to Tobias Ellwood, British Minister for the Middle East. He and the Pentagon have acknowledged that the Iraqi government will ultimately decide who will participate in the offensive.

Although the Iraqi government is supposed to have the last word on who will engage in the attack, it has expressed concern earlier this year that the PMF may have become too large and influential to control or fail.

Citing estimates from the Iraqi government and the Shiite militia force itself, the Associated Press (AP) reported in March that “the more than 50 Shiite militias in Iraq,” many of them backed by Iran, “have between 60,000 and 140,000 fighters… They are backed by tanks and weapons, and have their own intelligence agency, operations rooms and court of law.”

Although the PMU is predominantly Shiite, often backed by Iran, there are a number of Sunni units and at least one Christian militia as well as some fighters from other sects and denominations.

So far, the Iraqi Security Forces, the United States military, the Iraqi Kurdish peshmerga, and U.S. designated terrorist Sheikh Akram al Kabi, the leader of the PMF’s Shiite Iraqi militia known as Harakat al Nujaba, will all be fighting to push ISIS out of Mosul. Kabi predicted the entire Shiite-led and Iran-supported PMF coalition would participate as well.