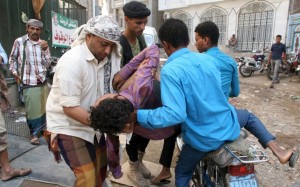 A garrison loyal to President Abedrabbo Mansour Hadi has held out in the city largely surrounded by the Houthi rebels and their allies who control the capital Sanaa and much of the north.

Taiz is one of the key battlegrounds of the civil war and government-held neighborhoods have come under repeated rebel fire.

A medical source at the city’s Al-Rawda hospital told AFP that seven civilians were also wounded by the rocket fire.

A loyalist military source said that the rockets struck one after the other in the city’s Al-Nour district.
Since March 2015, pro-government forces have been backed by a Saudi-led military coalition.

The UN has stepped up peace efforts this week with UN envoy Ismail Ould Cheikh Ahmed meeting Hadi at his base in second city Aden on Monday.

The envoy has been pushing a peace plan that would see a restored cease-fire leading to a political transition under which Hadi’s powers would be significantly reduced.

The push for a negotiated settlement has been driven by mounting civilian casualties.