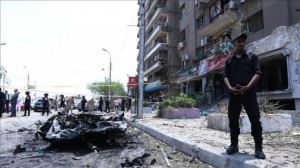 Two policemen were killed and two others injured Tuesday in a fresh militant attack in Egypt’s restive Sinai Peninsula, according to a local security source.

A police vehicle struck a roadside bomb as it was passing in North Sinai’s city of Sheikh Zuweid, the source said anonymously due to restrictions on speaking to media.

Egyptian authorities have yet to comment on the attack, for which no group has yet claimed responsibility.

Northern Sinai has seen an uptick in militant attacks in recent days in which dozens of soldiers were killed.

Since mid-2013, when Mohamed Morsi — Egypt’s first freely-elected president — was ousted in a military coup, hundreds of Egyptian security personnel have been killed in Sinai amid an ongoing militant insurgency.

Egyptian security forces, meanwhile, have continued to wage a fierce campaign, involving elements from both the police and army, against what they describe as Sinai-based “terrorist groups”.

Egypt’s army-backed authorities say they are battling the “Welayat Sinai” (“Province of Sinai”), which is said to have links to the Daesh terrorist group.