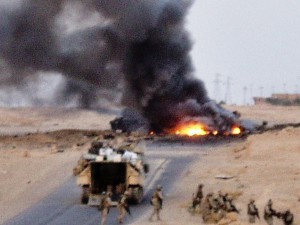 At least 16 Yemeni government soldiers have been killed by a roadside bomb in the province of Marib east of the capital Sanaa, military sources told Reuters late on Sunday.

The sources said the bomb, which also wounded six soldiers, appeared aimed at a patrol near an army camp in Marib. They said it was not clear who was behind the attack.

At least 5,600 people have been killed in seven months of war in Yemen, the poorest country on the Arabian Peninsula.

The coalition has gained ground in the south, but Houthi forces remain in control of much of the country despite the almost daily air strikes.