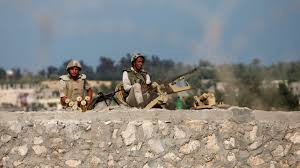 Three Egyptian policemen were killed in a roadside bombing in Sinai today, the second such attack in 48 hours in the peninsula where Islamic State terrorists are waging an insurgency.

The interior ministry said an officer and two police conscripts were killed when a roadside bomb exploded as their convoy passed in the North Sinai town of El-Arish.

The military launched a major offensive against the terrorists in September, claiming it killed scores in an attempt to restore order in the peninsula which borders Israel and the Gaza Strip.

Attacks have continued however, with the Islamic State group’s Sinai affiliate regularly claiming responsibility for roadside bombings and shooting attacks.

On Friday, a similar bombing in El-Arish killed a police officer.

Elsewhere in Egypt, the Islamic State group said it had planted a bomb at a Cairo road junction close to the pyramids on Friday, which wounded four people as police tried to defuse it.

Militants loyal to ISIS have killed hundreds of Egyptian soldiers and policemen, mostly in North Sinai.

The insurgency has swelled since the army’s ouster of Islamist president Mohamed Morsi in July 2013.

Hundreds more, including Mr Morsi himself, have been sentenced to death, often in mass trials. Many have appealed and won retrials, while seven have so far been executed by hanging.