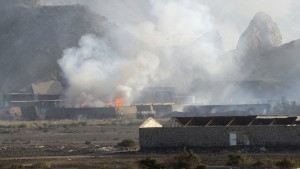 Yemeni rebels reported the successful test-launch of a precision scud missile on Sunday night, which was allegedly aimed at a Saudi military camp 40 kilometres west of Riyadh, like reported by alaraby.co.uk.

Saudi officials denied that the missile hit the military camp near al-Mazahimiyah and it has not been possible to independently verify this fact.

No local residents have reported hearing an explosion on social media.

The Houthi rebels announced the successful launch of a Scud-type ballistic missile at around 8pm GMT.

Saba News agency quoted a Houthi spokesperson announcing the attack as a “successful test-fire of a precision, long-distance ballistic missile.”

“We stress that the capital of [expletive] Saudi Arabia is now in the range of our missiles and, God willing, what is coming will be greater,” a statement from the Houthi government said.

The Saudi minister of defence, Mohammad bin Salman, was at a meeting with Yemeni president Hadi at the time of the attack.

This is the second alleged Houthi Scud missile attack on Saudi soil in one week and the latest attack since Yemen started stockpiling missiles in summer 2016.

On 31 January, a Borkan-1 missile reportedly killed 80 coalition soldiers on a Saudi-UAE military base on Zuqar Island in the Red Sea. This attack was never confirmed or denied by the Saudi-led coalition.

International indignation erupted in November last year after a Houthi ballistic missile was shot down near the holy city of Mecca.

A video released on YouTube on Sunday night appears to show a large underground stockpile of Houthi missiles on lorries.