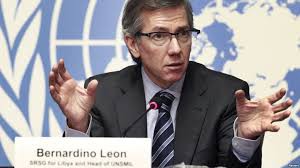 Rival Libyan factions were set to resume peace talks on Tuesday after a partial deal was reached last month, but hopes for a lasting ceasefire remain dim without the support of key power brokers.

The negotiations at the United Nations in Geneva are being hosted by UN envoy Bernardino Leon, who said the accord signed in Morocco on July 11 was an important step towards ending four years of deadly chaos.

That deal was backed by members of Libya’s internationally-recognised parliament based in the eastern port city of Tobruk, as well as members of other political parties, civil society and local officials.

But it was boycotted by the Islamist-aligned General National Congress (GNC), which was installed in Tripoli by a powerful militia alliance that seized the capital last year.

The UN has not yet confirmed those attending the latest round of talks and it was not immediately clear if any GNC representatives had travelled to Geneva.

But experts said that even if the GNC commits to the UN dialogue, a durable ceasefire could remain elusive.

“There may be a disconnect between the negotiators and those fighting,” said Frederic Wehrey, a North Africa specialist at the Carnegie Endowment for International Peace.

The UN-backed talks include “fairly influential people”, and may ultimately lead to the declaration of a prospective ceasefire, he said.

But he warned that without “a separate (negotiation) track for these armed groups”, stopping the bloodshed could prove impossible.

Libya has been plagued by near relentless violence since the 2011 overthrow of Muamer Gadhafi.

With the country deeply fractured — including two parliaments vying for power and a slew of armed groups battling for control of the country’s oil wealth — the UN hopes to forge a unity government that can ease the violence.

The West “may see the negotiations process as a path to ‘stability’ rather than peace necessarily,” said Fadil Aliriza, a Libya specialist at the London-based Legatum Institute.

“But it’s hard to imagine how political figures with dubious popular support and minimal control over their armed forces can bring peace to a fractured country.

“Even if GNC comes on board, which is anyone’s guess, the international community’s focus on getting a unity government doesn’t fix the sources of conflict,” he told AFP in an email.