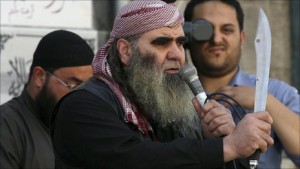 According to experts, the Salafi jihadi movement is making considerable headway in Jordan, whose adherents are increasingly crossing the border with Syria to carry out jihad.

Rising numbers of Jordanian youth are joining Salafi jihadism and are increasingly inclined to show support for the Islamic State in neighboring Syria, with Jordanian authorities, like their European counterparts, worried about the threat posed by jihadists on their eventual return to Jordan.One expert told Al-Monitor this week that 400 would-be jihadists have been arrested by Jordanian authorities for trying to join radical organizations in Syria. Attempts by the Jordanian intelligence services to infiltrate radical groups have met with mixed success due to the Islamic State’s effective intelligence service, managed by Abu Ali al-Anbari, a former Iraqi Army Major General under Saddam Hussein.

According to Al-Monitor, which attributes the expansion of the movement in part to a weakening of tribal traditions and linkage, about 1,200 Salefi jihadists are currently fighting in Syria, and about 350 have been killed in the conflict. Of those who have joined the jihadist community in Jordan, around 85 percent were supporters of the Islamic State.

Former Pentagon adviser David Schenker wrote last year that while the war in Syria “has emotional resonance for Jordanian Sunnis,” since it “pits the nominally Shiite regime against mostly Sunni rebels,” another reason for the rise in Jordanian Salafism can be found “through its appeal to so-called “East Banker” tribal-origin Jordanian Islamists, who have come to see the Muslim Brotherhood as a foreign Palestinian-oriented organization.”While the Salafist movement, which is believed to be the fastest growing Islamic movement in the world, is experiencing popularity across the region, for example gaining 25 percent of seats in Egypt’s 2011 parliamentary elections, the expert noted that Salafi recuitment is increasing in traditionally tribal Jordanian areas such as Zarqa, Salt, and Maan, and quotes the Jordanian Salafi leader Muhammad al-Shalabi, who said, “We have hundreds of true believers who are ready and willing and, thank God, are able to cross into Syria and defend their Muslim brothers and sisters.”