You are here: Home / West Asia / Rise in Islamic militant attacks on schools in Pakistan 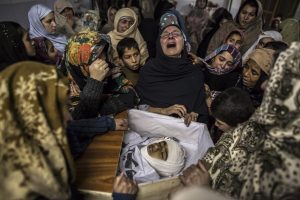 Last week an improvised explosive device was used to target a girls’ school in Hassokhel, North Waziristan, in northwest Pakistan. Thankfully, no children were injured in the attack, although a boundary wall was damaged. That bombing came just three days after another girls’ school in North Waziristan was attacked, this time in the town of Mir Ali. Residents said that militants have been distributing pamphlets demanding authorities shut down girls’ schools in the area, like reported by hrw.org.

Pakistan already faces major challenges to education due to low enrollment rates, gender bias, a lack of trained teachers, and poor physical infrastructure. But Islamist militant violence has further exacerbated these challenges and disrupted the education of hundreds of thousands of children.

Deliberate and indiscriminate attacks on schools and universities, their students, and staff have increased around the world over the past five years, according to a new report by the Global Coalition to Protect Education (GCPEA), which Human Rights Watch co-chairs. GCPEA found that the Pakistan Taliban is behind many of these horrendous attacks on Pakistani schools.

Human Rights Watch has documented government failures to stop or mitigate such attacks. For instance, the Pakistani government does not collect proper data on school attacks, so there is no monitoring to ensure that damaged school buildings are repaired or rebuilt. And perhaps more importantly, there are no systems to help traumatized students and staff who survive school attacks but struggle to cope in the aftermath.

Pakistan should develop a comprehensive policy for protecting all students – but especially girls, who are already disadvantaged from attending school by cultural factors – from being attacked at school.

Pakistan can start by endorsing the Safe Schools Declaration, a non-binding agreement that has been adopted by 74 countries who pledge to act to protect students, teachers, and schools from being attacked, and to restore access to education when attacks occur.

Attacks on education not only harm students and families directly affected, but have an incalculable long-term negative effect on Pakistan’s society and economy. The government should do all it can to keep Pakistani children safe at school.