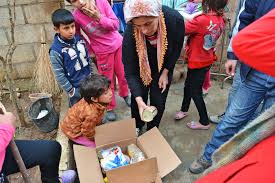 In recent months, nongovernmental organizations and journalists have accused the United Nations of bias toward Syrian President Bashar al-Assad’s regime and failure to distribute humanitarian aid to rebel-controlled areas of Syria. To an extent, these criticisms are justified. The UN does work closely with the Syrian government, and humanitarian aid has not consistently reached areas outside of government control. But the detractors overlook an inherent contradiction in the UN’s responsibilities in countries facing civil war.

According to the UN Charter, one of the organization’s purposes is to coordinate relief operations during and after disasters of a “humanitarian character” in which national authorities cannot cope on their own. The UN Office for the Coordination of Humanitarian Affairs has overall responsibility for the UN’s disaster-relief efforts, and its activities should be guided by the four principles of humanity, neutrality, impartiality and independence. It works with national governments, specialized UN agencies, and collaborating international and local NGOs.

But the UN also has a mandate to respect its member states’ sovereignty, which means that it must acknowledge an internationally recognized regime’s authority over its territory and the people living there. This is not an issue when countries are ruled by governments that have exclusive jurisdiction over their territory and a genuine concern for their citizens’ welfare. But it becomes problematic when these conditions don’t exist, such as in civil wars.

When militant groups capture territory within a country, it gives rise to a situation that the sociologist Charles Tilly called dual or multiple sovereignty. The rebels, rather than the internationally recognized regime, become the de facto sovereigns of areas they control. This poses a challenge for the UN because of its twin mandates to deliver humanitarian aid impartially and to respect its member states’ sovereignty.

The challenge becomes stark when an internationally recognized regime denies the UN permission to deliver humanitarian aid to opposition-controlled areas. From the regime’s perspective, the fear is that providing aid to these areas will sustain hostile communities, and could be perceived as acknowledging the rebels as de facto political leaders.

This civil-war scenario characterizes Syria. The Assad regime has lost control of vast swaths of territory within the Syrian Arab Republic’s nominal borders, and it has little concern for the welfare of communities living in rebel-controlled territory, as evidenced by the Syrian Army’s indiscriminate violence toward civilians in those areas.

And yet, despite the Assad regime’s contempt for humanitarian norms, the UN still must obtain its permission to operate in rebel-controlled areas. In fact, the UN’sHumanitarian Response Program for Syria stipulates that “the Government of Syria bears the primary responsibility for protecting its citizens.”

In theory, the Syrian government allows humanitarian aid to be transported across the frontlines from areas it controls to rebel-controlled territory. In practice, however, delivering aid has been extremely difficult, owing to ongoing fighting and bureaucratic obstacles put in place by the Syrian government. What’s more, the government does not permit cross-border aid: although this would be the most effective delivery method for rebel-controlled areas, it would subvert the government’s control of aid distribution and further undermine its own sovereignty claims.

The UN has very little power to influence the Syrian government’s humanitarian-aid strategy, and if it openly defies the regime, it could lose permission to operate in the country at all. Meanwhile, as the Syria crisis has worsened, pressure has mounted to improve humanitarian-aid delivery in rebel-controlled areas, and the UN has pursued a number of options.

For example, the UN has helped negotiate temporary ceasefires so that humanitarian-aid agencies can access besieged areas; UN agencies have quietly furnished local NGOs working in rebel-controlled areas with sorely needed supplies and technical advice; and the UN Security Council has passed resolutions to bypass the Syrian government and allow cross-border humanitarian-aid delivery.

Accusations that the UN is biased toward the Assad regime are unfair, given the reality on the ground. The UN has no other option but to cooperate with the internationally recognized regime, regardless of how that regime treats the population in areas outside of government control. While the UN has worked to overcome these constraints, its efforts have been necessarily slow, reactive, and ad hoc. Worse still, its efforts were possible only because the humanitarian crisis deteriorated to such an extent that it could no longer be ignored.

Ideally, the international humanitarian-aid regime would more accurately reflect the political realities in countries afflicted by civil war, and the UN would be able to work with all parties that control territory.

Another possibility would be to transfer responsibility for humanitarian aid in conflict zones to an NGO that is not under the same pressure to respect the sovereignty of internationally recognized regimes. Such a change would be incongruous with the current system of international politics, which is based on the inviolability of nation-states. But surely delivering humanitarian aid to those who need it should be prioritized over the sovereignty of governments that do not respect the welfare of all their citizens.