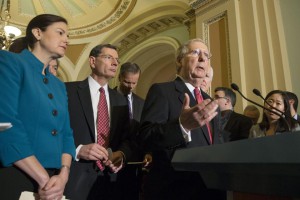 Republicans intend to hammer Senate Democrats next month if they do not allow an up-or-down vote on a measure disapproving President Obama’s nuclear deal with Iran.

Democrats appear close to having enough support for the deal to bottle up the disapproval measure with procedural motions. If Republicans vote in a united bloc, they would need the support of six Democrats to break a filibuster, but only two Democrats have broken ranks so far.

If the resolution is filibustered, it would be a major victory for the White House, which wouldn’t have to use President Obama’s veto pen to protect the Iran deal.

Opponents of the agreement, however, believe Senate Democrats will pay a political cost.“Democrats will be setting themselves up for a further political hit if they deny the people the opportunity —the people meaning members of Congress — to vote on it,” said Allen Roth, the president of the hawkish Secure America Now, which is staunchly opposed to the agreement.

“I think it’ll be handing a political gift to the Republicans.”

Republicans have already begun to make their case.

A vote to cut off debate would be hypocritical, Corker argued, after the Senate voted 98-1 earlier this year to allow it to review the agreement.

“All but one senator voted in favor of having the right to vote on the final deal, so then to turn right around and filibuster it to me is very inconsistent and I think would be confusing to the people they represent,” Corker told the AP.

Sen. Tom Cotton (R-Ark.) also scolded Democrats, warning this week that Reid “wants to deny the American people a voice entirely by blocking an up-or-down vote on this terrible deal.”

So far, 30 Senate Democrats have committed to voting in favor of the Iran agreement, compared with only two who have announced their opposition.

A 60-vote threshold has become common for major votes in the Senate, and there is little doubt that supporters of the agreement would aim to block legislation trying to kill it at every procedural turn.

“The Senate will debate and then take votes relative to the resolution of disapproval — the exact form and manner of that depends on Majority Leader McConnell,” Ben Marter, a spokesman for Senate Democratic Whip Dick Durbin (Ill.), said in a statement to reporters.

“Senate Republicans are either confused or trying to mislead the public by suggesting otherwise.”

The new counterattack could be a sign that Republicans are preparing for defeat, said former Reid aide Jim Manley, who is now at QGA Public Affairs.

“I think they’re probably getting a little bit nervous,” Manley said. “The momentum is obviously with supporters of the deal.

“I’m watching to see if the rhetoric’s going to get more ugly than it already is,” he added.

The public has given mixed reviews about the Iran nuclear agreement. Whether or not Democrats succeed in a filibuster, it’s certain that a majority of both chambers of Congress is prepared to kill the deal.

Looming over the fight is the 2016 election.

They have every reason to use the Iran vote to bolster those vulnerable GOP senators and attack Sen. Michael Bennet (D-Colo.), the only real vulnerable Democrat running for reelection next year.

“If Sen. Michael Bennet filibusters or votes for the Iran deal we will make sure voters know he supported a nuclear deal that threatens our national security,” Andrea Bozek, a spokeswoman for the National Republican Senatorial Committee, said in a statement.

Bennet has so far declined to state a position on the deal.

Still, Democrats are waving off any concerns about political retribution. Republicans — who made a habit of subjecting legislation to 60-vote thresholds while in the minority — are the ones looking like hypocrites, they insist.

“I think observers of the process will agree that this is just a little bit too cute coming from a party that forced cloture motions countless times over the past seven years,” said one senior Democratic Senate aide.

The Senate is scheduled to vote first on the bill, so a successful filibuster there would set up another question for Congress: What happens in the House?

A spokeswoman for Speaker John Boehner (R-Ohio) declined to comment on the House’s plans if Senate Democrats block the bill from advancing through the Capitol.

However, House lawmakers could technically still bring the matter up for consideration and force a tough vote for some Democrats — even though it would be purely symbolic.

“There’s no rule that says if it fails in one body the other can’t take it up,” said Manley. “Each body can do whatever they want.

“But with the Senate having spoken,” he added, “it’d just be a waste of time.”