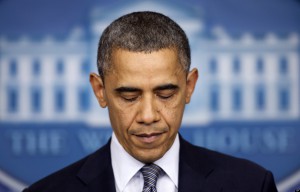 Republican presidential candidates have slammed US President Barack Obama for his policies in tackling the Islamic State and Iran, making a case to send more troops to defeat the terror network and strengthening Arab allies to deal with Tehran.

Ten of the 17 Republican presidential candidates appeared yesterday at the Fox News’s first primary debate in Ohio where they spoke about pressing issues including Iran, ISIS, immigration, abortion, economy.

While they bitterly fought among themselves in front of television cameras watched lived by millions of people, they were unanimous on withdrawing the Iranian nuclear deal, if elected to power in the 2016 presidential elections.

“We need to stop the Iran agreement, for sure, because the Iranian mullahs have blood on their hands, and we need to take out ISIS with every tool at our disposal,” Jeb Bush, the former Florida Governor said in response to a question.

The debate was conducted by Fox News in Cleveland, Ohio. “We have a president who doesn’t have a clue. I would say he’s incompetent, but I don’t want to do that because that’s not nice,” business tycoon Donald Trump alleged.

“Now, with Iran, we’re making a deal, you would say, we want him. We want out our prisoners. We want all these things, and we don’t get anything. We’re giving them USD 150 billion dollars plus…if Iran was a stock, you folks should go out and buy it right now because you’ll quadruple — this, what’s happening in Iran, is a disgrace, and it’s going to lead to destruction in large portions of the world,” Trump said.

Wisconsin Governor Scott Walker, another leading Republican presidential candidate, said, “We are leading from behind under the Obama-Clinton doctrine. America is a great country. We need to stand up and start leading again, and we need to have allies, not just in Israel, but throughout the Persian Gulf.”

“We should be talking about Hillary Clinton on that last subject, because everywhere in the world that Hillary Clinton touched is more messed up today than before,” Walker alleged. He said Iran is not a place the US should be doing business with.

“I’ve been fighting amidst a lot of opposition from both Hillary Clinton, as well as some Republicans who wanted to send arms to the allies of ISIS. ISIS rides around in a billion dollars worth of US Humvees. It’s a disgrace. We’ve shouldn’t fund our enemies, for goodness sake,” Senator Rand Paul said.

“We didn’t create ISIS. ISIS created themselves, but we will stop them, and one of the ways we stop them is by not funding them, and not arming them,” he said.

“To me, you terminate the deal on day one, you reinstate the sanctions authorised by Congress, you go to Congress and put in place even more crippling sanctions in place, and then you convince our allies to do the same,” Walker said.

“This is not just bad with Iran, this is bad with ISIS. It is tied together, and, once and for all, we need a leader who’s gonna stand up and do something about it. It’s yet another example of the failed foreign policy of the Obama-Clinton doctrine,” he said.

Bush alleged that when Obama became President he abandoned Iraq.

“He left, and when he left al-Qaeda was done for. ISIS was created because of the void that we left, and that void now exists as a caliphate the size of Indiana,” he said. Mike Huckabee said the United States got nothing out of the Iranian deal.

“We got nothing, and Iran gets everything they want. We said we would have anywhere, anytime negotiations and inspections, we gave that up. We said that we would make sure that they didn’t have any nuclear capacity, we gave that up,” he said.

Asserting that the country needs “a doer and not a talker”, Indian-American Louisiana Governor Bobby Jindal said he will provide “real leadership” to America if elected president in the November 2016 elections.

When asked how he would fight the Islamic State, Jindal said, unlike Obama he will actually name the enemy that the US confronts. “We’ve got a President who cannot bring himself to say the words “radical Islamic terrorism. He loves to criticise America, apologise for us, criticise medieval Christians,” Jindal said.

On the Islamic State of Iraq and Syria, Senator Lindsey Graham of South Carolina said if the US does not stop them in Syria and Iraq, the ISIS terrorists “are coming here”.

“If you are running for President of the US and you don’t understand that we need more American ground forces in Iraq and that America has to be part of a regional ground force that will go into Syria and destroy ISIS in Syria, then you are not ready to be Commander-in-Chief and you are not serious about destroying ISIS,” Graham said.

He stressed that the air campaign against the group will alone not destroy the dreaded terror network.

“We need a ground force in Iraq and Syria and America has to be part of that ground force…Syria is becoming a perfect platform to strike our nation,” he said adding that his “simple strategy” against ISIS will be “whatever it takes as long as it takes to defeat them”.

Talking about Iran, former Texas Governor Rick Perry said America needs to be on the side that is for keeping Iran from getting a nuclear weapon.

“We need to have some coalitions in that part of the world (Middle East) to go after ISIS,” he said. Lambasting Obama on the Iran deal, Perry said on his first day as US President he would “tear up the agreement with Iran” as it was a deal in which the US gave everything.

Carly Fiorina, former HP CEO, said her message to the Iranian Supreme Leader as President of the US will be that until Iran opens every nuclear and military facility to “full and open, anytime anywhere inspections” the US is going to make it as difficult as possible for Tehran to move money around the global financial system.

“On day one in the Oval Office, I would make two phone calls. The first one would be to my good friend, Bibi Netanyahu, to reassure him we will stand with the State of Israel,” she said.

“The second will be to the supreme leader of Iran. He might not take my phone call, but he would get the message, and the message is this: Until you open every nuclear and every military facility to full, open, anytime, anywhere, for real inspections, we are going to make it as difficult as possible for you to move money around the global financial system,” Fiorina said.

Describing the Iran deal as a “bad” one, Fiornia said Obama “broke every rule of negotiation”. Noting that while American allies are not perfect, she said Iran is at the “heart of most of the evil that is going on in the Middle East through their proxy”.

Fiorina said she would also ask the Arab allies what military assistance they need to defeat ISIS. “Obama has presented the American people with a false choice — it is what I’ve done or not done or its war,” she said.

Graham said the nuclear deal is giving Iran a “pathway to a bomb, a missile to deliver it and money to pay for it all.” Former New York Governor George Pataki said he is in favour of putting mosques under surveillance if that will help identifying individuals who are trying to radicalise American citizens.

He pledged to do “everything in our power” to go after those who are in the US before they can radicalise other Americans to carry out attacks and also called for shutting down their internet capabilities.

He said he is opposed to radical Islam that is allowed to engage and encourage violence against Americans.

On ISIS, Pataki said the US has got to destroy the group’s training camps and recruiting centers.