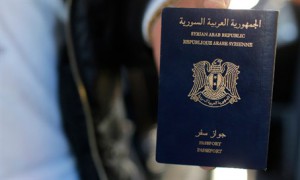 Islamic State (ISIS) have stolen “tens of thousands” of blank passports that it could use to smuggle its fighters into Europe as refugees, a German newspaper reported Sunday.

The Welt am Sonntag cited Western intelligence sources as saying that ISIS could have acquired the stolen travel documents in areas of Syria, Iraq and Libya it now controls.

The passports could be issued to would-be attackers to enter the European Union as asylum seekers, according to the report.

Moreover, ISIS has already launched a money-spinning operation with the fake documents, selling them on the black market where they fetch up to 1,500 euros ($1,630) each, Welt said.

European authorities have repeatedly warned of the potential threat posed by refugees traveling with counterfeit documents.

The two unidentified Stade de France attackers in Paris have been tracked back to two fake Syrian passports used to enter Europe.

“The large influx of people who are traveling to Europe unchecked represents a security risk,” the head of EU border agency Frontex, Fabrice Leggeri, told Welt.

Leggeri said that passports issued in war-ravaged countries such as Syria where conditions are chaotic mean that no one can guarantee “that documents that look real were actually issued by an official authority.”

Asked about the report, the German interior ministry offered a similar assessment.

The German government said last week that it had initially overestimated the proportion of people entering the country with fake Syrian passports, which was in fact far less than the 30 percent announced by the interior minister in September.

Germany has to date maintained an open-door policy for Syrians escaping their country’s bloodshed, giving them “primary protection” — the highest status for refugees.

Germany is Europe’s top destination for refugees, most of whom travel through Turkey and the Balkans, and expects more than one million arrivals this year.