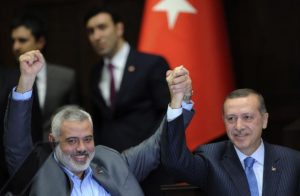 According to the report, the launch came while Hamas leader Ismail Haniyeh met with Erdogan in Istanbul. Haniyeh’s depity, Saleh al-Aruri, and Turkey’s Deputy Secretary of Intelligence, Kan Fidan, also attended the meeting, as did Erdogan’s chief aide Sefer Turan.

The report also claimed that the AKP is launching another proxy war for Erdogan, who wants to take over control of the Al Aqsa Mosque in Jerusalem.

According to the Bulgarian Military, Hamas terrorists are planning attacks both in Israel and abroad.

The site also noted that a Turkish journalist accessed secret documents confirming a espionage activities in Greece and an illegal intelligence gathering by Turkey’s National Intelligence Agency, as well as by Turkish consulates. The first of the documents dates from March 2019, the site noted.

The secret documents also show that Turkey is monitoring all of Erdogan’s critics, even after they cross into Greece and seek asylum.