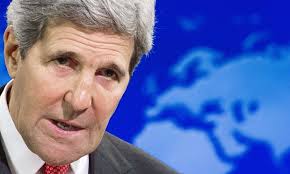 US Secretary of State John Kerry said Wednesday he was confident Middle East powers would send troops to help defeat the Islamic State group in Syria.

Washington has so far resisted suggestions it put US boots on the ground to add muscle to a year-old coalition air campaign aimed at breaking the jihadists’ grip on a swathe of Iraq and Syria.

But, in an interview with CNN, Kerry said he expected that when the time was right some of Syria’s neighbors would step up.

“We are talking about very specific ways to do that with other countries in the region,” he said.

“There will need to be people on the ground. I am convinced there will be at the appropriate moment,” he said.

“The president has made it very clear that American troops are not part of that equation,” he added.

“But I do know that there are others who are talking about it. There are people in the region who are capable of that.”

Kerry did not say which countries might be persuaded to take part in a ground operation, but the obvious candidates would be Turkey, Saudi Arabia and the Gulf Arab countries.

Shortly after making his comments, Kerry met with his Saudi counterpart Adel al-Jubeir, on the eve of a three-day visit to Washington by Saudi Arabia’s King Salman.

Washington is in intense discussions with Saudi Arabia and Russia about ways to restart talks on a Syrian political transition that would see President Bashar al-Assad depart and placate moderate rebels.

But it remains determined to “degrade and ultimately destroy” the IS group, which has declared a so-called caliphate on its territory and has openly boasted of carrying out atrocities.