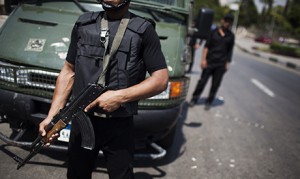 Egyptian police in Cairo have killed a leader of a regional Islamic State (IS, formerly ISIS/ISISL) cell, local media report.

The prominent terrorist figure, Ashraf Ali Ali Hassanein al-Gharabli, reportedly belonged to the Ansar Bait al-Maqdis group, which re-branded itself as the Sinai Province of the Islamic State after pledging allegiance to the Syria and Iraq-based terrorist organization.

The group claimed responsibility for dozens of attacks on Egyptian security forces and civilians. It claimed that it was responsible for the crash of the Russian passenger jet Metrojet Flight 9268.