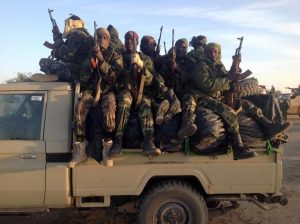 Sudan foreign minister expressed hope that the purpose of the deployment of a regional force along the border with troubled Libya is to bring regional stability, stressing that Libyans only can settle their internal political difference, like reported by sudantribune.com.

Minister El-Dirdeiry Ahmed made his remarks before the Conference of Libya’s Neighbouring Countries held in Khartoum to discuss the role of the region to prevent the development of non-states armed groups, terrorism and criminal activities in the region including human trafficking and drug.

The Sudanese initiative for the regional border force is separate from the UN-supported Group of Five for the Sahel which is mandated to address the threat of terrorism and transnational organized crime in the region. The G-5 Sahel includes Burkina Faso, Chad, Mali, Mauritania and the Niger.

“We look forward to the role of the region’s countries and the African Union to supporting these efforts to bring peace to Libya,” said Minister Dirdeiry, before to add that his government “extends its hands to all the Libyan parties” to create the appropriate atmosphere for dialogue and calm the conflict.

After the fall of Gaddafi regime in 2011, Sudan was perceived as supportive of the Islamist government of the General National Congress (GNC), which united with the government of the Council of Deputies in 2015 and formed the Government of National Accord. However, the unity government still has to receive the approval of General Haftar and his supporters in eastern Libya.

UN reports say Haftar and the other factions are using Sudanese and Chadian rebels. Also, terrorist groups from the Sahel countries are not connected with the elements of the Islamic State and other terrorist groups in the southwest of Libya.

The Sudanese top diplomat pointed out that Sudan’s initiative for this conference was necessitated by the need to confront the dangers and challenges of African armed groups based in Libya and to fight the organized and trans-border crimes.

He expressed the hope that joint security operations on the border areas with Libya will remove the danger of the presence of armed groups in southern Libya, adding it “turned that part of Libya into an alternative battlefield”.

The next meeting will be held within six months.