You are here: Home / Europe / ‘Refugee’ says he can’t be extradited to face terror charges as he will be tortured… in Italy

A Kurdish Islamist claiming refugee status in the UK has been exposed as the son-in-law of a notorious terror leader. He was arrested in the North of England as part of a pan European anti-terror operation and is wanted in Italy, charged with involvement in an active terror cell. 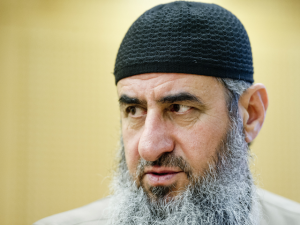 He is arguing he cannot be extradited to Italy to face charges of “conspiring to commit an act of international terrorism” and “subverting democracy”, because he says he might be “tortured or killed” in an Italian jail.

‘Refugee’ Zana Rahim, 32, was arrested in Derby, suspected of plotting to kidnap a British diplomat to avenge the imprisonment of a radical hate preacher called Mullah Krekar, 60, who was revealed as his father-in-law in a court hearing at Westminster Magistrates’ Court yesterday.

Infamous Krekar (pictured above) is a founding member of the al-Qaeda-linked Iraqi Kurdish jihadist network Ansar al-Islam, which imposed sharia law and fought British troops in northern Iraq before merging with the Islamic State in 2014. He has attempted to claim asylum in Norway, where he has been imprisoned since 2012.

Mr. Rahim was arrested along with Rahim Awat Wahab Hamasalih, 34, and Bakr Hamad, 39, for planning the abduction on November 12, as part of a European-wide probe into the Kurdish Islamist terror group Rawti-Shax.

Rawti Shax is a European offshoot of Ansar al-Islam which agitates to establish an Islamic caliphate in secular Kurdistan. Rawti Shax operatives have been identified in Italy, the UK, Norway, Finland, Switzerland, and Germany since the operation began last year.

The European group has utilised the deep web to coordinate its activities, setting up a “virtual headquarters” with a chatroom called KurdistanKurduIslamdidimwe.

Julian Knowles QC, for the Italian judicial authorities, described Rawti Shax – which is not yet a proscribed organisation – as a “dangerous and active terrorist organisation”.

However, Mr. Hamasalih, Rahim, and Hamad are contesting an extradition warrant from Italy, claiming they could be tortured in an Italian jail and thus must be given asylum in the UK.

“He was seen as a senior leader in public and in secret, dictating the actions and management of Rawti Shax. He was head of press, which involved the publication and dissemination of the fundamentalist thoughts of Mullah Krekar”.

Adding: “As head, he oversaw management that included financial relationships, meeting with many financiers”, according to the Derby Telegraph.

Mr. Knowles told the court of how Mr. Rahim was related to Mulla Krekar, having married his daughter, but this wasn’t his only link.

He said: “He is not just one of the family, he has an active involvement. He was one of the people to meet Mullah Krekar in prison, where they discussed the group’s security, as well as their financial situations.”

He said the men wanted to “promote jihadi values in Syria, as well as the rise of that project in Kurdistan”. Adding: “They may have been Italian-centred, but the attacks were to take place across Europe, including here in England.”

Mr. Rahim, Mr. Hamasalih, of Finchley Road, Birmingham, and Mr. Hamad, of All Saints Street, Hull, face charges of conspiring to commit an act of international terrorism and subverting democracy if they are extradited to Italy.

Their lawyers have claimed they could be tortured or killed in an Italian jail, and will be challenging extradition on the grounds of “refoulment”, which prevents the illegal returning of refugees.

All three men will remain in custody until the judgement on March 9. The hearing continues.