You are here: Home / Europe / Refugee crisis: Syrians and Iraqis clash with Afghans as ethnic tensions simmer in Europe 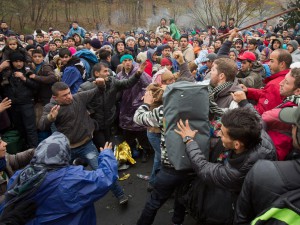 “The Afghans push and fight,” says Waddah Haj Ali, a lawyer from Aleppo in Syria, pointing at a large crowd of men of all nationalities pushed up against the Austrian border gate. “We left Syria as we want to feel like human beings. We lost our humanity there, but I am scared of the Afghans. We dare not go to the border point as they push through. They don’t know the systems.”

Mr Haj Ali and his wife are waiting in the no-man’s-land beyond the official transit camp at Sentilj in northern Slovenia. Inside the camp the scent of sweat on weeks-old clothes hangs in the air. At night more than 1,500 Afghan, Iraqi and Syrian refugees arrived and, by the next morning, Sentijl is at capacity. Police do not enter. Nor do the aid agencies. The only food for the lucky few is pizza passed over the fence by volunteers.

The refugees are taken by bus or train most of the way from the Croatian border to Sentilj, where they will rest before moving across to Austria. There have been tensions in Slovenia between refugee groups, say police, who earlier this week broke up a fight between Syrian and Afghan men who smashed their camp beds to build make-shift weapons. “I’m sorry to say this,” says a young Syrian university lecturer travelling with Mr Haj Ali. “And I know it sounds racist, but on our journey we have all seen what the Afghans do.” She does not want to give her name or show her face, citing family in Syria, but says large groups of Afghan men are “intimidating” Syrian families.

Rumours travel fast in camps where overstretched aid workers are concentrating on reuniting family groups, and it is hard to get to the truth of these disputes, but one of the biggest issue is refugees jumping the queue for buses or at border gates. There is pushing and shoving at Sentilj, but none of the violence that has been seen elsewhere in Slovenia in recent weeks. Last week riot police were put on standby after a fire broke out at a camp in the south of the country, amid reports it was started by young men Afghan men in protest at conditions. Regardless of the truth, many Syrian and Iraqi refugees now feel young Afghan men are causing problems. Violence, or the threat of it, does not feel far away.

“It’s easier for Syrians to get to Germany than it is for us,” says Mohammad Shinwar, 26, an Afghan who is trying to make it back to Britain. He was deported in 2014 after living in Manchester “without paper” for two years, but says he “could not stand” life in Jalalabad. He is travelling with four friends, all young men, all from towns and cities plagued by war. “The Syrians get better treatment than us. But that is life. That is what the governments have decided. I have made good friends on the way, but not everyone is so good. We have all come from bad situations.”

Another man, Irja, from Helmand, says many of his countrymen react badly as they are forced to walk long distances in the cold. “We have to push to get through. We are afraid they will stop us. We want to go to Germany,” he says.

There is also a different kind of argument here – a political one. “I am a Shia and I left Iraq after violence in Baghdad where we lived,” says Mohammed al-Muswi, who is travelling with his wife Bushra and six children. “We have to be careful. We don’t know who is here.” In Iraq he worked as a contract driver for a US defence contractor, so feels he has more reason than some to be worried. Elsewhere families from opposite sides of the Syrian conflict share tents, helping to feed each other regardless of their differences.

Slovenian police said 102,757 refugees had entered the small country in the last two weeks, with more than 5,000 of these arriving this morning. This came as the European head of the World Health Organisation warned that refugees urgently need heated shelters, warm meals and proper clothes, but also flu vaccines as they are “more prone to suffer hypothermia and frostbite”.

Jernej Vidmar, 29, a volunteer with the Slovenian Red Cross, said there was less “chaos” than a week ago and fewer disputes between groups, but that there were concerns over “missing children and the risk of human trafficking”. He said: “There is still not enough co-ordination between countries. Sometimes refugees arrive from Croatia when we are full and there is no room to move them on to Austria. The police are doing what they can, but it is going to get very cold in a few days.”