You are here: Home / Europe / Refugee crisis: present and future EU military operations in the Mediterranean 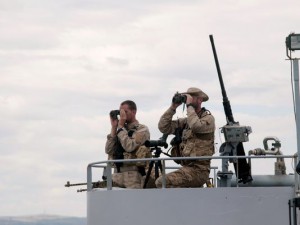 The EU military operation against people smugglers in the Mediterranean is about to enter its next phase. After gathering intelligence and setting up the structure, the operation will now focus on arresting traffickers and disabling smugglers vessel. The details of the operation were discussed by MEPs during a meeting of the security and defence subcommittee on 22 September.

Director General of the EU Military Staff Lieutenant General Wolfgang Wosolsobe presented the state of play of EU military missions and operations, including training missions, the anti-piracy operation off the Somalian coast, and the operation in the Mediterranean to tackle people-smuggling .

Launched in June, this operation focuses on gathering intelligence, but can later be expanded to include arresting traffickers and disabling smuggler vessels in EU and international waters.

At the hearing, Michael Gahler (EPP, Germany)  asked what would happen if traffickers were found on “suspicious” ships. Would these ships then be confiscated and sunk to avoid them being used to transport refugees? Answering to Gahler, Wosolsobe said the idea was to put smuggler vessels out of use, but not necessarily destroy them. They could be brought back to European shores.

Eugen Freund (S&D, Austria): “I’m a bit sceptical about the expression you used ‘We will be tackling the root causes of the migration issue’. I don’t believe that smuggling people who are fleeing from Africa belong to the causes of the problem. The roots of the problem lie where these people come from and why they are leaving their own country. “

Anna Elżbieta Fotyga (ECR, Poland) chair of the security and defence subcommittee, said the Mediterranean route was “unbelievably costly” for refugees: “It’s really necessary to start effective operations.” She added: “We have huge problems here in Europe, but we also have the responsibility to address real problems in Africa.”

“We are of course in the hands of member states as to how far they wish to go in the broader effort and particularly in the military effort” Lieutenant General Wosolsobe said.  He said there was now sufficient intelligence as to where the boats are, where they come from, where they are stored, how the smugglers are operating on the seas, explaining a UN mandate would be required for his forces to intervene within Libyan territorial waters.”