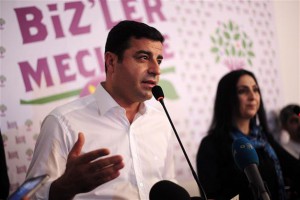 The Peoples’ Democratic Party (HDP) has vowed not to permit the outbreak of “civil war” in Turkey while urging the government to act in the face of recent violence in the predominantly Kurdish southeastern Anatolia region.

“Some circles have mobilized to instigate a civil war. Prime Minister [Ahmet Davutoğlu] and President [Recep Tayyip Erdoğan] are not around,” Selahattin Demirtaş, the co-leader of Turkey’s Kurdish-oriented HDP, told reporters on June 10.

“We are not an armed organization; they should give up this nonsense. We are engaging in democratic politics,” said Demirtaş.

“Each day, a funeral is being held and the government is not around. We have been foiling provocations and the cost is high. In a lot of places of the country, the HDP has been turned into a target. We entered an election, we didn’t engage in a war. We will not allow a civil war to break out in this country,” he said.

Three people were killed in Diyarbakır on June 9 after Aytaç Baran, the head of Islamic aid group Yeni İhya-Der, was shot dead, touching off a violent clash, two days after a historic election success for the HDP.

Two Doğan News Agency reporters, Canan Altuntaş and Serdar Sunar, as well as İHA reporter Burak Emek, were wounded when masked assailants allegedly attacked them with meat cleavers as they attempted to cover the incidents. Altuntaş is currently in hospital in critical condition, according to journalists’ union DİSK Basın-İş.

After Baran’s killing, witnesses said a group opened fire randomly on the street, while also attacking the Equal and Free Citizen Association building in the city’s Şehitlik neighborhood.

The motive for the killings was not immediately clear, although there have been sporadic clashes in the southeast in recent years between groups affiliated to the outlawed Islamist Hizbullah organization and supporters of the HDP.

The Patriotic Revolutionary Youth-Movement (YDG-H), which is seen as the youth wing of the outlawed Kurdistan Workers’ Party (PKK), immediately denied that it had any connection to Baran’s death, instead accusing Turkish state security of perpetrating the attack as a provocation.

The HDP also condemned the attack while expressing its sorrow at Baran’s death.

Only two days before the June 7 parliamentary election, on June 5, three people were killed in two blasts at a HDP rally in Diyarbakır.

Earlier this week, Demirtaş said a string of bombings targeting the party during its campaign had been linked with Islamic State of Iraq and the Levant (ISIL) militants.