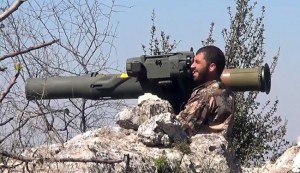 American-made anti-tank missiles are turning the tide against the Syrian regime and allied forces in a major battle in the country’s centre and northwest, rebel groups said Tuesday.

Non-Islamist opposition factions say they are using the US-made TOW missiles to halt a Syrian army advance that is backed by Russian air strikes in the provinces of Hama and Idlib.

The deliveries are distinct from ammunition packages that a US-led coalition airdropped to Arab rebel groups in northeastern Syria late Sunday to bolster the fight against the extremist ISIS group.

“These rockets have played an important role in stopping the fierce attack by the Syrian regime and its Russian ally,” said Asaad Hanna, spokesman for the non-Islamist Division 101.

“We are using the (TOW missiles) more now to turn up the heat on the front lines,” Hanna said.

According to the Syrian Observatory for Human Rights, non-Islamist groups in central Syria have been receiving increased amounts of TOWs in the past four days.

Observatory head Rami Abdel Rahman said that rebel commanders were telling their units to “attack any soldier you see using TOW missiles as we have a blank cheque” with supplies so plentiful.

In 2014, rebel groups vetted by the US received TOW missiles for use in the provinces of Idlib, Aleppo, and Latakia.

Ahmad al-Shuhub, spokesman for the Fursan al-Haq rebel brigade, saide the current support was coming from the US-led military based in Amman.

Shuhub said the missiles had allowed the rebels “to respond to the Syrian army’s advance”.

And Lieutenant Colonel Ahmad Saoud, spokesman for Division 13, said the TOW missiles “have determined the battle”.

“Whatever we are want, they are giving it to us,” Saoud said, adding that his group’s situation in terms of ammunition and weapons “is fantastic”.

“The TOW missiles are the central and vital player in determining the battle between us and Russia, Iran, and Syria.”

According to the Observatory, Division 13’s base in the northwestern province of Idlib was targeted by Russian strikes last week.

Russia began its air war in Syria on September 30, saying it was targeting the ISIS (Islamic State in Iraq and Syria) group and other “terrorists”.

The strikes have been concentrated in Hama and Idlib, often striking Islamist and other rebels instead of ISIS.

Russian air support in northern parts of Hama province has helped a Syrian army ground operation retake some villages in the area.