Fighting in Yemen has continued in places despite a ceasefire being in place ahead of planned peace talks to take place in Kuwait. 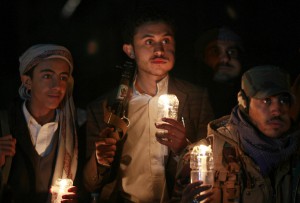 At least 13 pro-government fighters were killed in a rebel attack on their positions near the Yemeni capital despite a UN-brokered ceasefire taking effect this week, military sources said on Thursday.

The rebels attacked positions of Gulf-backed loyalist fighters in Nihm, northeast of Sanaa, where clashes have occurred for two weeks despite warring parties promising to abide by a ceasefire that took effect on Sunday at midnight.

A number of Houthi rebels were also killed in fighting that erupted after the Wednesday attack, loyalist military sources said.

The fragile truce is meant to pave the way for peace talks next Monday in Kuwait.

Military sources said on Wednesday that rebels had killed a senior loyalist officer and wounded six troops in Nihm.

Two pro-government fighters and a rebel were also killed in other clashes east of Sanaa.

In the southern loyalist-held province of Shabwa, rebels fired a mortar round on a village, killing three children aged between six and 10, according to a provincial official.

Saudi Arabia and its Sunni-dominated Arab allies are backing the Yemeni government in the conflict against rebel Houthis, who have seized the capital Sanaa and other parts of the country.

The war has left more than 6,300 people dead since March 2015 and worsened living conditions, with more than 80 percent of the population now on the brink of famine.