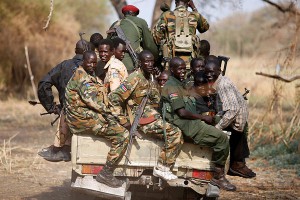 UN spokesman, Stephane Dujarric, said on Thursday that the incident happened in the town of Kaka, in the northeastern province of Upper Nile, AFP reported.

Dujarric demanded that the “national contractors be released immediately, unharmed and unhurt,” adding that attacks against peacekeepers may constitute a war crime.

Dujarric called on rebel leader, Riek Machar, to “take his responsibilities” and “uphold his commitment to the United Nations that all be returned safely.”

In a similar incident on Monday, 100 heavily-armed rebels kidnapped 20 peacekeepers when they captured the barge traveling on the Nile, north of Malakal. The peacekeepers, however, were released on Thursday.

According to reports, some 12,500 peacekeepers have been deployed in South Sudan since 2013.

South Sudan plunged into chaos in December 2013, when fighting erupted between troops loyal to President Salva Kiir and defectors led by his former deputy, Machar, around Juba.

The conflict has killed tens of thousands and displaced more than two million people.

The government forces and rebels signed a ceasefire deal, which has reportedly failed to stop the clashes.

The UN Food and Agriculture Organization (FAO), the UN Children’s Fund (UNICEF), and the World Food Program (WFP) said in a joint statement on October 22 that “at least 30,000 people are living in extreme conditions and are facing starvation and death” in the country.