You are here: Home / MidEastGulf / Rebel shelling in Yemen near Aden kills at least 45 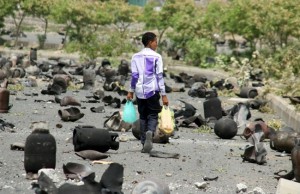 Houthi rebels and their allies in Yemen randomly shelled a town Sunday outside of Aden after losing control of some the port city’s neighborhoods, killing at least 45 and wounding 120, officials said.

Two ministers from the government exiled in Saudi Arabia returned to Aden this weekend, and toured the southern city devastated by four months of ferocious fighting.

Fighters from the Popular Resistance loyal to President Abed Rabbou Mansour Hadi advanced toward the rebel-held district of Al-Tawahi, a military source said.

The violence highlighted the bloody chaos of the civil war gripping the Arab world’s poorest country.

A leader with the Houthi rebels denied shelling Dar Saad, a town just north of Aden and long home to fighters resisting their advances. But Yemeni medical officials and a doctor with an international aid organization said the shelling clearly came from the north and east of Dar Saad – areas under rebel control.

Aden, the scene of some of the war’s fiercest ground battles, saw Saudi-backed troops and fighters seize from the Houthis some of its neighborhoods and its international airport last week. Sunday’s shelling in Dar Saad appeared to be a way to both punish those resisting the Houthis, as well as halt the advance of their opponents.

Yemeni medical and military officials said hundreds of residents fled Dar Saad amid the shelling as ambulance rushed through the streets, sirens wailing. They said the shelling killed at least 45 people and wounded 120, all believed to be civilians.

Abdu Mohammad Madrabi, 65, said he was in line outside the post office to collect his pension when the shells hit, causing chaos. Madrabi, who was wounded in the neck, back and leg, said private cars carried the wounded to hospitals because there weren’t enough ambulances.

The shelling was intense in the neighborhood of Sharqiya, hundreds of meters from the post office.

“It’s been one shell after the other since the morning,” said Arwa Mohammad, a resident of Sharqiya locked up in one room with her seven-member family for safety. “We are feeling the house is going to collapse over our head.”

Anis Othman, a neighbor of Mohammad, also described a scene of pandemonium.

“Balls of fire are falling over our heads amid the screams of children and women,” he said. “Why all that shelling? There are no weapons or fighters here. They [the rebels] want to terrorize us and drive us out. This is only rancor and hate.”

Zeifullah al-Shami, a Houthi leader, denied targeting civilians in the shelling, saying his forces were engaging the rivals on the front lines. “This is part of the media deception,” he said. “We didn’t kill civilians.”

However, the rebels had vowed to retaliate after losing ground in Aden. The rebels now are largely based in Aden’s western neighborhood of Al-Tawahi, as well as bases east of Aden and in Lahej province, north of the city. Saudi-backed fighters also are advancing on a military air base in Lahej province.

The fighting in Yemen pits the Houthis and troops loyal to former President Ali Abdullah Saleh against southern separatists, local and tribal militias, Sunni Islamist militants and loyalists of Hadi, who is now based in Saudi Arabia.

Fierce fighting in Aden broke in March, sparking the Saudi-led airstrikes. More than 3,000 people have been killed since, including more than 1,400 civilians, according to United Nations agencies.

The conflict has left 20 million Yemenis without access to safe drinking water and uprooted more than 1 million people from their homes, the U.N. has said.

Hassan Boucenine, the head of Doctors Without Borders in Yemen, called the situation in Dar Saad “very, very difficult.” He said his medical facilities had received 50 wounded people and 25 corpses.

“There will be more,” he said.

The rebels, meanwhile, also targeted Saudi positions across Yemen’s northern border in Najran and Jizan, according to the rebel-controlled Saba news agency which cited a military source.

Elsewhere, firefighters managed to extinguish a huge blaze at a gas depot southwest of Taiz in central Yemen after it was shelled by rebels, according to the government-run news agency.