You are here: Home / MidEastGulf / Real reason behind Russo-Kurdish cooperation in Syria 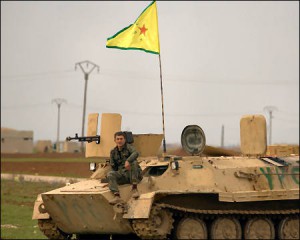 The Kremlin has found a new ally in the Kurds during its anti-terrorist campaign in Syria. They are effective in pushing Islamic State (IS) and other terrorist groups out of key areas in Syria, French political journalist Olivier d’Auzon wrote for Le Huffington Post.

Turkey’s decision to shoot down a Russian Su-24 bomber in November made Moscow furious; in turn, the Kremlin decided to support Kurdish forces in Syria, d’Auzon said.

According to the author, Moscow allegedly sent arms to 5,000 Kurdish fighters in Afrin.

The powerful Kurdish YPG force is considered the most effective group fighting IS in Syria.

“Russian military assistance to the Kurds is, without a doubt, part of Russia’s response to the actions of the Ottoman Empire [Turkey],” d’Auzon explained, according to Le Huffington Post.

Fighters from the predominantly Kurdish group People’s Protection Units (YPG) of Syrian Kurdistan not only successfully defended their territories from IS, but also pushed the jihadists out of a few key areas in northeastern Syria over the past year.

As of late, Russian planes have allegedly helped the Kurds to gain new ground not only against IS jihadists, but also against other terrorist groups in Syria, d’Auzon said.

Working in coordination with Russian planes, Kurdish forces have advanced into the western part of Afrin. The move has made the Turkish government very uncomfortable, as it threatens to cut a major supply route between

The installation of Russian S-400 anti-aircraft systems in Syria following the downing of the Russian Su-24 helps Kurdish forces a great deal, as they prevent the Turkish Air Force from bombing Kurdish positions. Without Ankara’s airstrikes against them, Kurdish fighters have pushed Daesh from the western bank of the Euphrates River, WSJ said.

An interesting point is that both Washington and Moscow support the YPG. That’s why the Kurdish brigade might now have carte blanche to do more than any other group fighting in Syria.

Since the US government isn’t doing a great job fighting IS in Syria, it has to rely on the Kurds as its primary and most effective partner in the country, WSJ said.

Furthermore, Washington’s anti-IS campaign is mostly taking place in Iraq, where the US-led coalition focuses most of their airstrikes. The Obama Administration seems to have given Russia freedom of action in Syria, which Moscow is using effectively, Le Huffington Post reported.

Russia President Vladimir Putin said in in September 2015 no one but Assad’s forces and Kurds are fighting Islamic State.

In November 2015, the United State reconfirm its support to the Kurdish forces in Syrian Kurdistan, a State Department spokesman said.

The Kurdish YPG forces has seized swathes of Syria from Islamic State with the help of U.S.-led strikes.